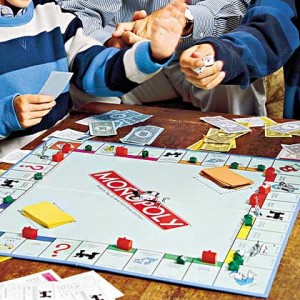 Years ago, before our daughter was a teen or even a “tween”, we made a commitment to spend at least one night a week with the television off. We could not plan anything for that night (Thursday nights), the menu food had to be “fun” (homemade pizza, chicken wings, hamburgers, nachos), dinner prepared and cleaned up early, popcorn popped, and we would all meet at the dining room table for Game Night.

At the time, there were only 3 of us. Gregg came and went working out of town, but the nights he was gone Kaylee and I would play cards. When he was home, our options were limitless. We loved it. We talked, bonded, joked, bonded, played around, laughed, and got to know each other in a way that parents and children don’t always have an opportunity to do.

As Kaylee got older and wiser and more involved in the social status that only a tween girl could understand, Gregg and I assumed that she would eschew game night for more vogue pursuits. But, no. What happened was amazing – she started inviting friends over for game nights – especially the nights when Gregg was out of town so that we would have more than two people to play.

I started scouring game stores for fun, interesting, challenging games. It’s rare for me to buy a new one, because we have all of the gems and it’s hard for us to break away from dominoes or Clue or a 7-dice game that we love. But one time in a mall somewhere in either Birmingham or Montgomery, Alabama, I did stumble across a treasure that I paid 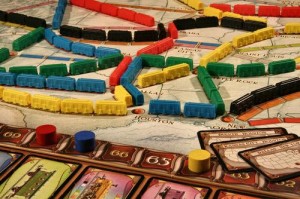 way too much money for, but that I discovered not only entertained us immensely, but also taught Kaylee U.S. geography and the concept of distance. It’s called “Ticket to Ride” and is based on a European game (and won numerous European gaming awards) of the same name.

Years have passed and now our schedules aren’t so set in stone. Kaylee has church youth activties, piano lessons, sleepovers, parties, etc. But we still commit to one night a week – that night is just a floating night and is determined when we have our family planning hour on Sunday afternoons. But when you look at my menu every week, you can probably pick out our gaming night by what I’m serving.

Scott is old enough to know that he wants to participate and can no longer be entertained with a train set from Ticket to Ride or a stack of Dominoes, so we’re back to what it was like when Gregg and I first established it. We’re playing Candy Land or Chutes and Ladders or Memory or Dominoes. But we’re loving it, and we’re spending QUALITY time togther as a family. And it is quality time. We don’t have computers or iTouch’s or phones or the telvision on. We tune the radio to K-Love or throw in a CD and just play until it’s time for bed. 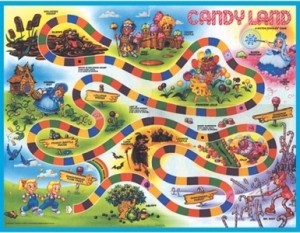 If you don’t have a set game night, I highly encourage it. Once a week, turn the world off and have FUN. Interact with your children in an intimate setting where they feel comfortable to share their life with you. If you have really young children, it is never too early to start. Pulling out a Scrabble game can be used to play ABC games, Dominoes or dice can be numbering games. If you have older children, you may be really surprised at just how receptive they are to the concept of just being together as a family that way.

What kind of family fun activities does your family do on a regular basis?