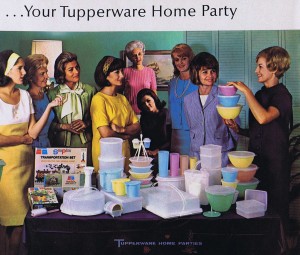 I was born in 1972. I know that’s hard to fathom for some of you younger wives and moms out there. I graduated high school in 1990 – probably around the time some of you were born. When I graduated high school, I remember wondering why there would be an initiative to raise money to put computers in the school, because I couldn’t fathom what they would be used for in the classroom.  These were the days before the public use of the internet, before www.anything, and long before any kind of pixel driven social media.

I remember when I was a little girl, my mom had a Tupperware party in our home in Ft. Lewis, Washington. My older brother, Jim, was in kindergarten and my little brother, Ty, was a baby. It was an afternoon party while Jim was in school – during a time when most wives and mothers would be home and available to attend an afternoon party.  I remember my mom cleaning the house, making snacks, brewing tea, cooling sodas – and then I had to play in my room while the house filled with other wives and moms and the Tupperware sales woman did her sales pitch. I remember having little Tupperware cups, popsicle makers, and matching canisters on the kitchen counter when it was all over.

When I became an adult, I had my share of “parties” — 31 purses, Premier Jewelry, Pampered Chef — I’d invite 20 friends and 5 or 6 would show up. But that was okay, because you could hand out catalogs to all of the friends who had a dozen other commitments but who still wanted to see what the latest line was and the sales woman would extend the party for you.

Now, though, it seems like parties of this nature are coming to a slow crawling end. The last 31 party I attended, I was the only guest, but there was an order sheet of orders already filled out.

This morning, I received an invite to an “all day online party”. Basically, instead of getting together, socially, with a bunch of friends and friends of friends, I just have this in my “social media calendar”, and on that day I potentially go and order, and that “host” gets the “hostess” points and gets her free gifts. 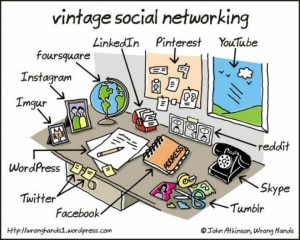 For everything good that it does (and there is a lot of good to it), I feel like social media has sucked the social right out of our lives.

And, I know it’s not just social media. It’s busyness – it’s filling our days until they’re so full that there’s no time to take a break and go to a friend’s house for one single evening and enjoy the company of a bunch of other women while we all munch on snacks and sip drinks – even if that evening is under the guise of buying jewelry or another purse we really don’t need.

But what social media has done has kind of excused this lack of social in our lives and created a way to “make it all better” — so that we can cram more and more into our life and keep up with friends and family and complete strangers on our time and within our limitations.

Last night, I met a friend for dinner and we were in the restaurant for about 3 hours.  Eventually, the waiter even quit coming to our table. We just were having too good of a time talking to each other, the restaurant wasn’t overly crowded, and it didn’t matter that we occupied that table space.  Another table, directly in my line of vision, was filled three times during the time I sat there. One couple came in, sat down, and picked up their phones. They looked through their menus with phones in hand, waited with phones in hand, and ate with phones in hand – and never, not a single time, said a word to each other. They didn’t even look at each other. Whatever was going on in the media of their phones was more important than their interaction with each other.

I’ve been alone this week. I’ve set it this time alone aside to write a book I’m finishing. In doing so, I pulled off of a social media presence so that I wouldn’t be distracted during the day and focus entirely on writing.  Whenever I do something like this, I LOVE it. I love the freedom I receive by not constantly checking social media. I HATE being in a social media climate and want so badly to pull out of it – but I’m bound to it by the nature of my career.

How about you? Do you find that social media is taking your social life away? Turn it off for a few days and see how different your life can be without it. See how much more often you look up and look out and SEE the life going on away from the screen.

Going Vegan: Let Your Medicine Be Your Food