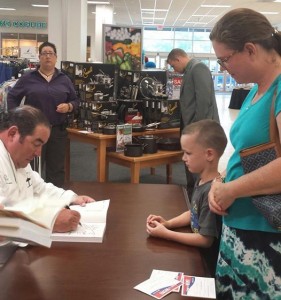 We were in a museum in Washington D.C. this week, at the end of a long day. We’d started the day out standing in line for 2 hours, waiting to get a 30 second moment with Emeril Lagasse while he signed a cookbook, and it ended with this museum. Scott was overwhelmed with the day. Well, I don’t know if that’s accurate. Scott’s overwhelmed with the last 2 weeks. He’s not been home, he’s not been eating “normal to us” food, and he’s not in his secure little bubble. So, at the end of long days, we start losing him.

Meltdowns aren’t *really* a problem. They come and go, but they aren’t the norm. What Scott has been doing lately is muttering to himself and occasionally squawking, really loudly, while jumping up and bugging his eyes out. Then he goes back inside himself and starts muttering, then squawks – over and over again. What he’s doing is some scene from (I *think*) The Lego Movie, but I can’t be certain. It’s really loud, and people look at him like he’s lost his entire mind. But what it is, is HIS MIND protecting him from whatever stimulation is overwhelming at the time so that he doesn’t actually lose his mind.

So, the other day, at this museum, at the end of this long day in the midst of these long weeks, we were in a room that was wall-to-wall screens showing a beach landing in WWII full of lights and sounds and battle, and Scott did his thing. The guide in the room we were in glared at him at a moment of loud squawking and then looked at me and said, “No more candy for this one, right?”

I have to say, while I’m sure this Marine Corps vet wasn’t trying to hurt or anger me, he very much succeeded in me feeling a very sharp knee-jerk reaction (which I did not follow up on, that I just ignored while I grabbed Scott and tried to break into whatever world he’d sent himself into.) Instead of reacting or not reacting, I just sent him back to the hotel with Kaylee while Jeb and I finished the museum.

Dear world: It isn’t misbehaving. It isn’t hyperactivity. It isn’t too much candy. Or too much soda. Or too little discipline.

It’s called an autistic brain coping with this incompatible world the best way that it can.

It’s called a REALLY GOOD kid in a REALLY OVERWHELMING situation who doesn’t know what else to do but go into a world where he is in control until we get him to a place that is dark and quiet and he can plug headphones into his tablet and escape all the way away while he watches some familiar show and resets to the point that he can deal with this world some more.

I KNOW that there are people who will read these words who have no idea what it’s like – and that’s fine. Make snap judgements all you want.  But I urge you to keep sarcastic comments about apparent misbehaving kids to yourself. Because, as the mother of that boy, I’m fully aware of how it appears – as much as I’m fully incapable of putting a stop to it quickly enough so that it doesn’t bother you.

I also fully know that he isn’t deaf. Nor is he stupid. He hears everything — even in the midst of a meltdown — and understands every word that’s said.