This year has been an amazing year for Scott. He’s come so far in his attention, drive, focus, coping skills — so far in fact that the special ed teacher told us in his parent teacher conference that she didn’t think he’d need to be under an IEP after next year.

That is, until this week.

I don’t know if he has spring fever or what. I just know that this week has been horrible – he punched a boy (who was bullying him) in the eye- twice because the kid punched him back and then it was ON, he was removed from the classroom twice, he’s had two full days where he refused to work at all…

His class is going on a field trip to the Louisville Science Museum on Monday. On their desks in his classroom is the word “LOUISVILLE”. Every time they get a mark in class, they have to scratch through a letter in the word. If they scratch out the entire word, then they don’t get to go.

Scott started the week off with no scratch marks. As I type this on a Friday, I hope and pray that he made it through the day without scratching out those few remaining letters. (UPDATE: He made it! Yay!)

He also has a special ed field trip next Friday to a local park. The agreement for that was that any student who made 90% average in behavior for the week for the last three weeks get to go. Until that note came home, Scott was getting between 90-100% per day. This week — well, let’s just say that yesterday he was at 10% and that was just one day of five. 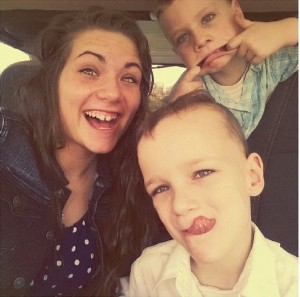 I’m hoping that this is just end of the year syndrome. I’m hoping that he’s just so TIRED of sitting through the school day and HATING every second of it that he is just DONE. Because, what I don’t want is that this is the new norm. If that’s the case, then we’re going to have to examine what we’re doing and determine what needs to be changed. That isn’t as simple as it may seem.

In other news, Jeb has scored in the 3rd grade level in testing of reading and math as he exits Kindergarten. That comes with its own set of challenges, but he LOVES school, which makes mornings easier that if both of them hated it as much as Scott. And Kaylee is looking at ending the year with a 4.2 gpa despite balancing a job, volleyball, and a driver’s license.

We’re all counting down the days. 11 more days of school. 3 more Mondays. We got this.