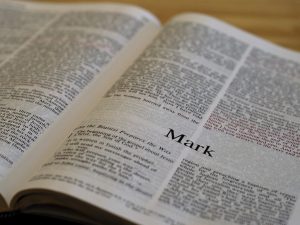 Today, I listened to Mark 5 through Mark 13.

Now a certain woman had a flow of blood for twelve years, and had suffered many things from many physicians. She had spent all that she had and was no better, but rather grew worse. When she heard about Jesus, she came behind Him in the crowd and touched His garment. For she said, “If only I may touch His clothes, I shall be made well.”

Immediately the fountain of her blood was dried up, and she felt in her body that she was healed of the affliction. And Jesus, immediately knowing in Himself that power had gone out of Him, turned around in the crowd and said, “Who touched My clothes?”

But His disciples said to Him, “You see the multitude thronging You, and You say, ‘Who touched Me?’”

And He looked around to see her who had done this thing. But the woman, fearing and trembling, knowing what had happened to her, came and fell down before Him and told Him the whole truth. And He said to her, “Daughter, your faith has made you well. Go in peace, and be healed of your affliction.

Crowds were thronging around Jesus – likely pressing against him, pushing him, touching him.

Throng is defined as: a multitude of people crowded or assembled together; crowd.

A single woman among the throng touched his garment, and he felt it.

What made her touch so different from all of the others around Him? What made Him feel her touch more than someone who might have pushed against Him in the crowd?

He said it to her, “Your faith has made you well.”

How much more faith did she possess than the multitude around Him, desperate for Him to heal them? So much more that when she touched His garment, He felt the power go out of Him.

Christ has said in Matthew 17:20, “for assuredly, I say to you, if you have faith as a mustard seed, you will say to this mountain, ‘Move from here to there,’ and it will move; and nothing will be impossible for you.”

Is my faith strong enough that Christ would feel me touch His robe among the multitude? Would that single touch, fought for against the throng, heal me? I pray that my faith is that steadfast. I pray that God will be pleased with my faith.

May God bless you and bless your day. Find a word of God speak to you today..