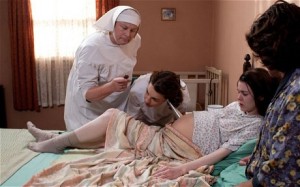 I’ve been watching Call the Midwife on Netflix.  It’s an amazing show.  It’s based on the memoirs of Jennifer Worth, a midwife in the 1950’s in the east end of London – one of the poorest parts of the city. Nurse midwifes and nuns bicycle around their area of London, doing home visits, home births, and clinic appointments.  It’s beautifully and brilliantly done.

My OB doctor for Kaylee’s pregnancy induced me because I’d started to go into labor, but hadn’t really progressed much.  Instead of sending me home, he started a Pitocin drip 1 week before my due date.  That was an INCREDIBLY difficult natural birth because Pitocin makes your contractions come on so suddenly and so hard that you have  no way to even deal with them.  AND, because you’re on an IV, you can’t even get out of bed and try to work through the contractions.  It was hell for about 5 hours, and I swore with Scott that I wouldn’t even attempt to go to the hospital until I felt like I had to push, so that they wouldn’t try to strap me down to the bed. Until I became high risk and, well, nearly died at 30 weeks pregnant, we were even leaning toward a home birth. 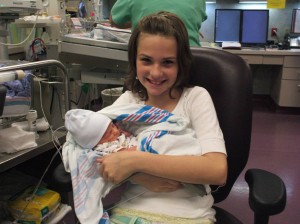 I love the simplicity of natural home births and the lack of medical intervention on labor.  Despite my high risk pregnancies that resulted in emergency c-sections and long NICU stays, I wish that was our societal norm now.  I’m not a fan of epidurals or the clinical-ness of giving birth in a hospital.

That said, I just watched one where an infant died of Atelectasis – which is the lung not fully expanding or the lung collapsing.  Jeb had that at birth. Because of modern medical advances, he had a 10-day NICU stay and came home alive.

I think there’s a fine line between medical progress and medical intrusion.  I personally believe that, for the most part, the medical community has intruded on healthy, normal pregnancies.