Preview of the upcoming Virtues and Valor series 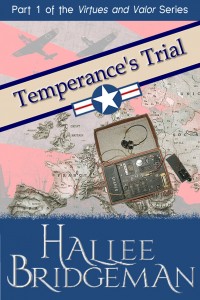 Here is the prologue from the Virtues and Valor Series, Book 1, Temperance’s Trial, due out in September. This will be a serialized set of seven novellas that take place during WWII. Each book will follow a different female heroine throughout the planning and execution of a mission in occupied France. Every character will be based on a real life heroine from that war. In the back of each novella, I will tell you about the heroine who inspired that book’s character.

Marie Gilbert woke with a start. She could hear the pounding on the front door from up in her room. With urgency, she threw off her nightgown and quickly slipped her dress over her head. As she buttoned the top button, her bedroom door flew open and her brother, Edward, dashed inside and went straight to the window. He peered out into the back garden.

“Go!” their father ordered from the doorway. “Don’t look back.”

“Papa!” Marie cried as Edward put an arm over her shoulders and guided her to the window. “Come with us, papa.”

Her father adjusted his coat and buttoned it at the waist. His eyes caught those of his son long enough to order, “Take her to Switzerland. Don’t look back.” He straightened her bed and flipped her pillow over. He retrieved her nightgown from the floor and shoved it into the top drawer of her bureau before he left the room, shutting the door behind him.

Edward looked out the window again, peering into the twilight darkness, searching the backyard and surrounding area. Marie felt her stomach knot in fear. “Edward, how can we leave him?”

“Because he said to.” He pushed the window open, stuck his head out and looked all around including up onto their roof. When he pulled his torso back inside, his voice never rose above a whisper. “Can you make it to the tree limb?”

Marie looked at the stout limb that nearly brushed her window. “I haven’t in years. I’m a grown woman now. I don’t know …”

Edward held out his hand. “We’ll make our way through the trees until we’re in the Philipe’s yard. Ready? No time to waste.”

Marie took a deep breath, and slipped a leg over the window sill. She looked down into the yard, two stories below. Without hesitation — well, maybe a little hesitation — she reached her hands out and leapt forward.

The trees on the estates were older than the buildings, and their branches entwined like the arms of an old married couple. Marie and Edward made their way carefully and just as quietly as possible through the trees. In the dark, branches scratched at her face and snagged in her hair, but she kept silent. Hearing a ruckus below, she paused just at the fence line and looked down below and behind them, seeing the uniformed Vichy police officers and members of the German Security Force haul her father from their home.

Biting back a cry, she met Edward’s eyes. His face looked grim, but he didn’t say a word. He just pressed his lips together and gave a harsh shake of his head.

They didn’t climb down out of the trees until they were on the far side of Philipe’s yard. Silently, they rushed across the grass and over the fence into the garden of Edward’s friend, Andre. In the far back corner, next to the stone fence, Edward knelt to the ground and removed a stone from the pillar. He reached inside and pulled out a sachet. He quickly opened it and studied the contents.

“Here, take this,” he said, handing her identification papers and a small cloth bag. She was now Andre’s sister, Muriel, despite Muriel’s age being closer to 30 than Marie’s own 20. Inside the bag, she found a blonde wig, which would cover her brown curls. With the wig on, the picture matched well enough, and at a glance the papers looked good.

“Do I call you Andre now?” She asked as he quickly pasted a pencil thin mustache onto his clean shaven upper lip.

“For now.” He counted the stack of francs and tucked them into his inner jacket pocket. “I have a car waiting in Tence. We’ll drive to Firminy and take the train to Geneva from there. Hopefully, it will be far enough away that they won’t look for us at the station.”

Over fences, under cattle gates, and through the wilderness, they ran and hid until they reached Tence. In a barn on a farm on the outskirts of town, they recovered the car Edward had secured, a 1925 Ariès flatbed in need of new tires, paint, and upholstery but with absolutely nothing wrong with the motor. The keys were hidden in the chicken coup. They pushed the car out of the barn and down the lane before starting the engine.

As they drove along the dark roads, Marie thought of her father. Tears burned in her eyes while she considered what might happen to him. But, she knew it was all in God’s hands.

But, they all knew the risks. That was why Edward had spent months planning escape routes, hiding identification papers, storing money, securing a vehicle. He knew one day the Germans would come for them.

“He should have gone with us,” she said, leaning her head against the window.

“You know we only escaped because he didn’t.”

“I’m just glad we didn’t have any children in the house last night,” she said, weary. She blinked against her burning eyes.

“God is good. Maybe they won’t be able to detain him since no children were there.” He gestured with his chin. “There should be a canteen in the back if you’re thirsty.”

“I just worry about who else might have been arrested,” Marie said. She rolled her eyes on her neck. “Do I have any terrible scratches on my face? I don’t want to stand out at the train station.”

Edward looked away from the road long enough to glance at her face. “Nothing terrible,” he said.

“Thanks.” Reaching behind her, she grabbed the canteen. “Where will we go?”

“London.” Edward reached over and squeezed her shoulder. “With Papa being English, maybe we can stay there.”

“Of course you would. But, we have to put that aside right now.” Putting both hands back on the wheel, he said, “We both do.”