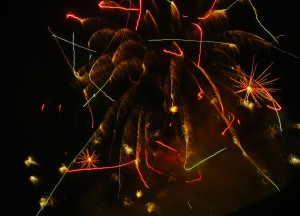 Dear Neighbors Who Have Been Setting Off Fireworks for the Last Week:

Yes, this is to you.  You who have been setting off fireworks since about June 27th until 11 or 12 at night.

Some of us have young children, and the LOUD BANGING NOISE of the exploding fireworks coming every 45 seconds or so KEEPS THEM AWAKE AT NIGHT.

Some of us have special needs children who have sensory issues and who end up on their knees on their beds, shielding their heads and rocking back and forth whimpering against the repeated noise that just WON’T STOP FOR HOURS.

Some of us have husbands who actually have to go to work the next morning, but instead, are up until MIDNIGHT with over-stimulated children WHO CAN’T SLEEP.

Some of us have children who have some pretty serious sleep issues, and even if they ARE KEPT UP UNTIL MIDNIGHT, will still wake up at 6AM.  And, if they fall asleep for even 5 minutes during the day, they cannot fall asleep at night, which creates a cycle if insomnia that is hard to break.  So, they spend their day, AFTER BEING KEPT UP UNTIL MIDNIGHT BY YOU in a state of exhaustion that has no relief.

All of you who are my neighbors live in a town where it is ILLEGAL to set off the kind of fireworks you’re setting off.  Which means, when I call the police and tell them that you’re setting off the fireworks ILLEGALLY, they actually will go put a stop to it.

So, you can now consider yourself no longer ignorant on the matter.  And while I’m as patriotic as any American out there, and will be lighting sparklers and setting off firecrackers with my sons on the 4th of July, I will NOT be lighting fireworks until midnight on the 2nd.  Because I’m not ignorant nor inconsiderate.  I’m just tired.