Every Child is Different 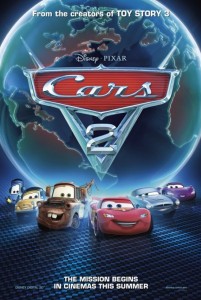 I read the pluggedinonline.com review of Cars 2, which opens tonight.  Here’s the link to the review.

Those of you who know my son, Scott, know that Lightning McQueen is his obsession.  Wherever he goes, whatever he does, Lightning does it with him.  I’m not a huge fan of that, and this obsession began long  before he ever even saw the movie — which should show you how clever the marketing is to our children.

In what’s easily the film’s most suggestively disturbing scene, a vehicle is tortured as his engine is revved and his internal fluids are slowly set to boiling. The victim begins smoking and reacting in pain and eventually blows up (offscreen).

A good friend of mine is an employee of Dreamworks and sent an email with a head’s up about this scene.  A friend of his had been to an advanced screening of it and was upset that his son was with him.  His words were, “I want to see it again – it was a great movie – I just don’t want my kids to see it again.”

I posted this on Hallee the Homemaker’s Facebook wall, and a personal friend said, “Will this keep you from seeing it? Anyone else?”

I have to tell you — I don’t  know.  That’s going to be something Gregg and I will discuss.

And this is why: 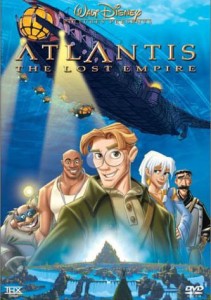 In 2001, Kaylee was 4 – the same age Scott is now.  I took her to see Atlantis not realizing it was PG instead of G.  Going by memory — in the beginning scene, the city of Atlantis is being threatened and a spaceship or something similar hovers over the city.  In the panic of the chaos, a mother is running down the street with her young daughter.  The necklace around her neck starts to glow, and she is taken up into the ship by some tractor beam.  As soon as that happens, a shield falls over the city and maybe it sinks into the ocean.  The young daughter is left on the streets holding her hands up to the ship screaming, “Madre!  Madre!”

Fast forward to the current plot — good guys come to the city, something bad is threatening it.  No one has aged – except the young girl who ages to a young lady and stays that way.  In the end of the movie, the city is threatened by whatever is threatening it, and this time the daughter is taken up into the ship.  But, after it does whatever it does, she is returned to the city.  As soon as the adult daughter hits the ground after being expelled from the force field producing ship, Kaylee starts screaming, “Where’s her mother!?  Where’s her mother!?”

Somehow, my four-year-old figured out that the girl became the woman and that her mother never came back.  Then, after two hours of movie, thought about the mother right away.  For months after seeing that movie, she would have nightmares where she would wake up screaming, “Where’s her mother!?  Where’s her mother!?”

So, don’t assume your child isn’t going to understand the torture.  And don’t assume that your child won’t grasp all of the ins and outs of it.  It might be something that will haunt them for some time after.

Every child is different, and what bothers one won’t bother the other, which is why situations like this should be individually judged and weighed by the parents accordingly.