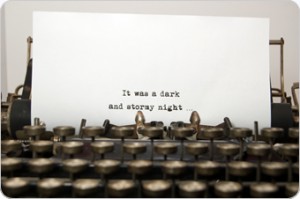 Since I broke the ice by officially talking about my writing earlier this week, I thought I’d share this with you.  This is the prologue to the first book in a trilogy about 3 half sisters. I am moving forward with the trilogy, but discarding this prologue. (I have actually completed the first two books and am finishing up the third.)
I thought some of you might like an introduction to the characters along with my fiction writing style.

There were three of them. Sisters. Half sisters, technically, born to the same mother but different fathers. They lived in bad circumstances, the kind of childhood existence that makes for melodramatic and heart-wrenching movie of the week scripts. Within their horrible little world they made it by surviving one night at a time. There were nights when it was bad, and then there were those nights when it was really bad. The really bad nights they all had to hide.Tonight was one of those really bad nights.

Robin hadn’t gotten out of the way fast enough. Maxine and Sarah had been able to hear her screaming from their closet hiding place, but to go out there, to face HIM wouldn’t have helped Robin. It would have just given him two more targets, or possibly hostages. Eventually, Robin crawled in with them, shaking with fear and rage, not even knowing which was the strongest emotion from one tremor to the next. She’d managed to fight him off this time. He was probably still trying to get his breath back. But Robin needed her strength for the next night… and the next … and the one after that.

Robin was fifteen, blonde, blue eyed, and already beautiful. She was the oldest of the three. The protector of the other two. She had no memory of her father but knew he was doing seven to twenty-one for trafficking cocaine.

Green eyed Maxine was twelve, olive-skinned, with straight, dark hair that testified to the proof of her father’s American Indian blood. He had been a warm bed on a drunken night, and only Maxi’s features gave evidence of which of her mother’s many one night stands had fathered her. She had never learned his name. Neither had her mother.

Little Sarah was nine. She was thin — too thin — pale, and small enough to pass for six. Her brown, curly hair had red streaks that came out in the summer. She needed glasses, but he had already broken them twice, so she survived in a blurred world, unable to see any details around her. When Sarah was two, her father had played lollipop with a loaded revolver and lost.

Robin wrapped her sisters in her arms as they heard the front door open, heard their mother’s raucous laughter and a man’s answering voice. Then HE started yelling and the sound of glass breaking made each girl flinch.

Their mother’s shrill shrieks added to the cacophony, and the new man’s voice joined in. The three girls inched further back into the closet as the fight intensified. Shouting escalated, words began to become clearer, and Robin tried to cover her sisters’ ears to block out the quarrel. The adults screamed at each other about a deal gone bad, about drugs, about money. There had been many fights like this in the past, and the three sisters prayed that he would leave this time.

In the silence, Maxine shifted, but Robin gripped her arm tight enough to bruise, her dirty nails digging into her sister’s brown skin. Heavy boots moved through the apartment, entered their room, started toward the closet. They each drew in a breath and held it, surprised their teeth didn’t rattle and give them away. Then the screech of sirens penetrated the thin walls and they heard the heavy boots run, heard the door slam.

They didn’t move. They waited through the silence, through the banging on the door, through the dozens of footsteps that entered the apartment. They heard the shouts and the buzzing and chirping of hand held radios. They heard the metallic clicks of hammers falling back onto unfired chambers and eager, stiff muzzles sliding forcefully back into worn leather sheaths. The light in their room flicked on and, after a moment, a voice called, “Hey, Sarge, there’s toys in here. Little girl toys. Dolls and stuff.”

They sat there in the dark, quivering with their backs to the wall, their arms wrapped around each other, and shivered together, terrified of what waited for them outside the closet.