Every Sunday, my clever husband offers me a “day of rest” by writing posts, usually on the subject of his primary ministry. I pray this post touches you or speaks to you in some special way.

What do you get when you cross an dinosaur with a chicken?

On October 15, 1999, at a press conference in Washington D.C., the National Geographic Society announced the discovery of the newest fossil called Archaeoraptor liaoningensis, meaning “ancient bird of prey from Liaoning” as the find was unearthed in Liaoning, China.

In fact, according to Tim Friend of USA TODAY, “The specimen, smuggled into the USA from China, was found at a gem show last year in Tucson by Stephen Czerkas, owner of the Dinosaur Museum in Monticello, Utah. He purchased it for $80,000 and made a deal with National Geographic to study and publicize it and ultimately return it to China.” (January 25, 1999, LIFE Section, USA Today)

It is probably worth noting that the National Geographic Society is widely known as one of the most prolific and vocal promoters of the theory of Darwinian organic evolution. 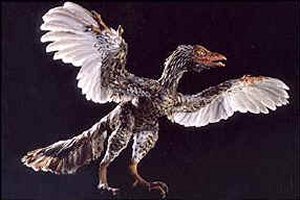 According to National Geographic, the turkey-sized animal was “…a true missing link in the complex chain that connects dinosaurs to birds. It seems to capture the paleontological `moment’ when dinosaurs were becoming birds.” According to their press release, the anatomy of Archaeoraptor proves a feathered theropod dinosaur was capable of flight. The features include:

…a very advanced, birdlike shoulder structure, wishbone and big sternum—all indicating the animal was a powerful flier. Remains of feathers surround the specimen’s bones. Yet its tail was strikingly similar to the stiff tails of a family of predatory dinosaurs known as dromaeosaurs, which includes the “raptors” of Jurassic Park.

The original unveiling notes several remarkable characteristics. “This mix of advanced and primitive features is exactly what scientists would expect to find in dinosaurs experimenting with flight,” and “It’s a missing link between terrestrial dinosaurs and birds that could actually fly. The arms of the fossil are quite wing-like, much longer than would be expected of a normal theropod dinosaur.”

A two-page photograph of the rock slab containing Archaeoraptor appeared with the article. The description and interpretation of Archaeoraptor was accomplished by two scientists, each funded entirely by National Geographic: Stephen Czerkas of the Dinosaur Museum (Monticello, Utah) and Xing Xu of the Institute of Vertebrate Paleontology and Paleoanthropology (Beijing, China).

The fossil was studied under normal light, UV light, CAT scan, and x-ray. Czerkas said, “It’s a missing link that has the advanced characters of birds and undeniable dinosaurian characters as well.” Czerkas was also commissioned by National Geographic to produce a life-size sculpture of Archaeoraptor. Both Czerkas and Xu appeared at the news conference on October 15, 1999, in Washington and endorsed the authenticity of the fossil. Also endorsing the fossil and its “feathered dinosaur” interpretation in Washington was Philip J. Currie of the Royal Tyrrell Museum of Paleontology (Drumheller, Alberta).

“The idea of feathered dinosaurs and the theropod origin of birds is being actively promulgated by a cadre of zealous scientists acting in concert with certain editors at Nature and National Geographic who themselves have become outspoken and highly biased proselytizers of the faith. Truth and careful scientific weighing of evidence have been among the first casualties in their program, which is now fast becoming one of the grander scientific hoaxes of our age—the paleontological equivalent of cold fusion.” Storrs L. Olson, Curator of Birds, National Museum of Natural History, Smithsonian Institution.

The National Geographic magazine boldly stated the implications: “We can now say that birds are theropods just as confidently as we say that humans are mammals. Everything from lunch boxes to museum exhibits will change to reflect this revelation.” 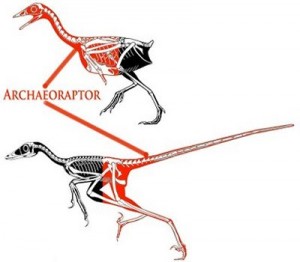 Olson disagreed. “The hype about feathered dinosaurs in the exhibit currently on display at the National Geographic Society is even worse, and makes the spurious claim that there is strong evidence that a wide variety of carnivorous dinosaurs had feathers. A model of the undisputed dinosaur Deinonychus and illustrations of baby tyrannosaurs are shown clad in feathers, all of which is simply imaginary and has no place outside of science fiction.”

In the eleventh hour, the script for a Jurrassic Park film was even adapted to take on the idea that modern birds “evolved” from dinosaurs like the Velociraptor.

According to USA Today, Storrs Olson, curator of birds at the Smithsonian Institution’s Natural History Museum and an outspoken skeptic of the bird-dinosaur link, claims that he warned National Geographic in November of 1999, when the article was published, that there were serious problems with he fossil. He says he was completely ignored. “The problem is, at some point the fossil was known by “Geographic” to be a fake, and that information was not revealed,” Storrs L. Olson, Curator of Birds, National Museum of Natural History, Smithsonian Institution.

“It was disappointing to learn that Archaeoraptor may be a combination of animals,” said Christopher Sloan, senior assistant editor of National Geographic and author of the magazine’s article about the find, published last November. “But we’re still convinced that Archaeoraptor is an important specimen. After all, if it is a composite, it is a composite of some very important 125 million-year-old fossils.

But of course, it was a composite. It was, in fact, an intentional forgery.

So then the blame game began and was played to the hilt for the next year or more. Who knew what and when did they know it? After all the finger pointing stopped, the blame rested firmly on the back of some anonymous Chinese farmer.

Chinese farmers, without benifit of sophisticated and technologically advanced machine shops or precision tools or instruments, are apparently nevertheless clever enough to assemble a fraud of global proportions.  Those poor, poor Darwinist scientists.  How could they have been so deceived?

Unless, of course, they desperately wanted to be fooled and hoped, based on pure religious zeal, that the fraud finally offered proof of their unsupported claims.

I find it fascinating that even Darwinists now accuse other Darwinists of being “outspoken and highly biased proselytizers of the faith” and by “faith” they mean the religion of Darwinism.  Yet Darwinists insist they hold no religious beliefs.

Of course it is a religion.  It is a religion when you believe something so completely based largely on faith — little evidence and not a shred of proof.

Which is more credible?  Fallible man?