Passion for the Word

The following devotional is from A Place of Quiet Rest: Finding Intimacy with God Through Daily Devotional Life edited by Nancy Leigh DeMoss:

“I must have a Bible of my own! I must have one, if I have to save up for it for ten years!”

The year was 1794. For as long as she could remember, little Mary Jones had yearned to hold a Bible in her hands so that she might read it for herself. For years, she had sat at night on her weaver father’s lap and listened to him tell stories of Abraham, Joseph, David, and Daniel. But her family was far to poor to afford a Bible, even if one had been available, for Bibles could scarcely be found in all of Wales during those days.

Two years earlier, Mrs. Evans, the wife of a nearby farmer, having learned of Mary’s longing to read the Bible, had promised the child that when she learned to read, she could come to their house and read their Bible. As soon as the first school opened in a neighborhood village, Mary had eagerly set about learning to read.

Now, the ten year old girl had just walked two miles from the North Wales village of Llanfihangel to the Evanses’ farm. The distance was no object to the eager child: “I’d walk farther than that for such a pleasure, ma’am!” she said to Mrs. Evans. 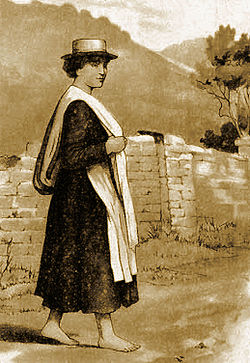 When once Mary finally was left alone in the room with the Bible, she reverently lifted off the white napkin that covered and protected the cherished Book. Then, with trembling hands, she opened the Bible to the fifth chapter of John where her eyes lit on the words, “Search the scriptures, for in them ye think ye have eternal life: and they are they which testify of me” (John 5:39, KJV). Confident that God had spoken to her directly, she earnestly vowed to search His Word with all her heart.

Every Saturday from that point on she made the journey to the Evanses’ farm where she read, studied, and memorized entire chapters from the borrowed Bible. All that time, however, her heart ached, so great was her yearning to have a Bible of her own. She purposed that she must have a Bible, at any cost.

For the next six years, in addition to her studies at school and the many chores to be tended to at home, Mary used every available moment to do odd jobs for friends and neighbors. Every penny she earned was carefully laid aside, until at long last she had saved enough to buy a Bible of her own.

When she learned that the closest place a Bible could be purchased was the town of Bala, some twenty-five miles away, there was no question in her mind about what she must do. With hope in her heart, she started out early one morning, walking barefoot so as not to ruin her one pair of shoes Before she reached her destination, her feet were blistered and cut from the stones in the road.

Physically weary, but barely able to contain her excitement that her lifelong goal should be so nearly realized, Mary finally arrived in Bala where she poured out her story to the minister, Mr. Charles. When she had finished, Mr. Charles reluctantly informed her that the last of the Bibles available for purchase had already been sold and that the remaining Bibles had been promised to others. Furthermore, the Society that had printed the small quantity of Welsh Bibles did not intend to print any more.

So great was Mary’s disappointment, that she began to sob uncontrollably. Touched by the intensity of her passion to have a Bible of her own, Mr. Charles decided that she must have one of the few Bibles left in his possession. Words cannot describe the ecstasy Mary felt as Mr. Charles placed into her hands the precious treasure for which she had prayed, wept, and hoarded all these years. Her heart sang as she walked the twenty-five miles back home, carrying her very own Bible, the Book that would remain her dearest friend and companion throughout her life.

The footnote to this story goes on to tell how: “Mr. Charles Thomas’ encounter with Mary Jones deeply impressed him and led to the establishment in 1804 of the British and Foreign Bible Society, a society dedicated to publishing and distributing the Word of God throughout the world.”

As I read this, I immediately thought of my dad, who is very active with his local Gideons International chapter. There are places in the world where the Bible is outlawed, and people carry around one precious page at a time. Gideons work to place Bibles in as many hands as possible, and have distributed more than 1.5 billion since 1908.

I have probably ten Bibles in my house. I don’t have to walk two miles to read one, and I wouldn’t have to walk barefoot for 25 miles to own one. But the question is: would I? Is my passion for God great enough that I would make those sacrifices just to receive His Word?

As I sit here in the safety of my heated home in a country where I’m free to read any religious document I want to read, it’s easy to say, “Yes.” I pray that my passion for the Lord would only become greater if hurdles were placed in my way. I pray that it never wains, and that no sacrifice I would have to make to read the Word of God would ever compare to the sacrifice Christ made on my behalf and on your behalf.