Not Celebrating Halloween Isn’t as Easy as You Think 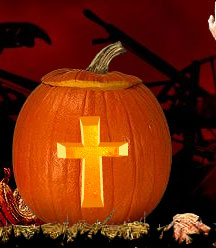 Like the history and traditions of Christmas and Easter we’ve talked about on this blog before, Halloween’s roots are a compromise of paganism and Christianity.

Over 2000 years ago, Celts in the British Isles area celebrated their new year on November 1st.  They believed that at this time, souls of the dead traveled to the other world — but in doing so, roamed the earth right before departure.  To help the dead along their journey and keep the living from being affected by those of the dead who were evil, the Celts held a festival called Samhain.  During Samhain, they would dress up in animal skins and wear animal heads, light bonfires, and make burnt sacrifices with the harvest and of animals.

When the Christians entered the area, the church declared Samhain to be an evil observance.  Because they were trying to influence the Celts to follow the church, they attempted to make the festival more Christian oriented rather than pagan in nature (instead of just guiding new Christians to leave their pagan traditions behind them.)  In the 7th century, Pope Boniface IV proclaimed November 1st as “All Saints Day”, which was also known as “All Hallows” or “All Hallowmas”.

The evening prior to “All Saints Day” or “All Souls Day” was still observed by many Celts by leaving gifts of food outside their doors to appease the spirits.  (much like handing candy to the “ghosts and goblins” that come knocking on doors Halloween night.)

We don’t “celebrate” or “observe” Halloween in any respect in our family.  We do not believe that Christian-izing any pagan holiday or traditions glorify God in any way.  There was a time when we thought we could mix the two, but now we just don’t feel like we can and have it be pleasing to God.

However, we also don’t condemn those who do choose to celebrate or observe Halloween.  This isn’t something that I can open the Bible and say, “This verse here clearly identifies Halloween has wrong.”  It’s one of those areas where you’re to read your Bible and make your own decisions, draw your own conclusions, and let the Holy Spirit convict you as He sees fit.  In fact, our church will even be having a big trunk-or-treat, and knowing how awesome the children’s ministry is in our church — I imagine it will be an amazing event. 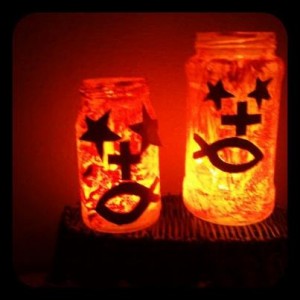 It’s hard in our society today, though.  Because everyone does something, and when you have young kids you can’t avoid it.  Jeb had a “harvest party” at school – which is fine because they didn’t dress up and all they did was create Christmas ornaments that they will sell during a fundraiser and donate the money to a local charity.  However, in his backpack were two treat bags filled with jack-o-lantern, ghost, witch, and mummy toys and candies — and he goes to a Christian school.  MOST of our friends will observe Halloween, and most of our friends are Christians.

Scott’s school is dressing up in costumes on Halloween day and trick-or-treating in an area near the school.  We could disallow his going on the “field trip” to the trick-or-treating, but he would be at school all day with friends who were dressed up in their costumes, excited about Halloween — and that would do nothing but make him feel excluded and stressed out.  Why would we do that to our young son?  Instead, he’ll have to miss the entire day of school.

It’s all part of being in the world but not of the world.  It isn’t easy to constantly affirm the fact that we do not celebrate Halloween with boys who are exposed to it on such a level.  Even trying to keep it out of our home, images and decorations and discussions about it are EVERYWHERE.  This is a holiday that is a huge part of this culture, so since we live and learn and shop within society, there’s going to be exposure.  Much like Santa Claus, we just constantly encourage, talk, explain, and encourage some more.

And when all of the talking and encouraging are done, we deal with the confusion and tears about not getting to go trick-or-treating to get all of that candy (made with processed sugars and artificial dyes – another post entirely – haha!).

Do you observe Halloween?  How do you reconcile it with your children?