Hallee on the Issues: Immigration

I don’t have a lot to say about immigration except this: If my children were hungry or in danger of persecution and/or death, and I had no relief whatsoever in my land, I’d do whatever I had to do and go wherever I had to go.

In Leviticus, God said this: And if a stranger dwells with you in your land, you shall not mistreat him. The stranger who dwells among you shall be to you as one born among you, and you shall love him as yourself; for you were strangers in the land of Egypt: I am the LORD your God. 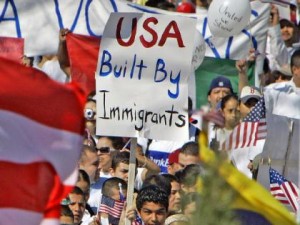 Our country is such a beacon of hope and posterity that people will make rafts out of scraps, then risk the waters of the Atlantic Ocean just to reach our Florida shores.  We have people that will pack themselves into shipping containers and risk death to traverse the Pacific Ocean in hopes of finding a life here.  We have people that will load into the backs of semis packed like sardines and facing perilous heat and no airflow just to cross the southern border.  And yet, we have such strict immigration laws that it almost becomes a license to treat those that actually make it with their lives in a slave-type atmosphere with horrible living conditions and lower-than-minimum wages.  It’s shameful and sinful.

This is an issue that is so oddly polarized.  I think Jesus was pretty clear when he said the following in Matthew 25:34-46:

Like with everything else our nation faces, there isn’t an easy push-one-button answer.

We have a monolithic immigration system that keeps a starving family out of the land of plenty, but due to being over-burdened with the immigration laws on hand, can’t prosecute wanted drug smugglers, body-traders, murderers, and the like.

Some people want strict immigration laws because of fear of “other” races.

And He has made from one blood every nation of men to dwell on all the face of the earth, and has determined their preappointed times and the boundaries of their dwellings,so that they should seek the Lord, in the hope that they might grope for Him and find Him, though He is not far from each one of us;for in Him we live and move and have our being, as also some of your own poets have said, ‘For we are also His offspring.’ Therefore, since we are the offspring of God, we ought not to think that the Divine Nature is like gold or silver or stone, something shaped by art and man’s devising.
Acts 17:26-29

Some Americans complain that illegal immigrants take jobs from Americans, but when tough laws are enacted as happened recently in Alabama, Americans refuse to get off the dole and move into the vacated jobs.

Lots of people want strict immigration laws because of fear of loss to some undeserving “other” when America is still the land of plenty.  It just isn’t a zero sum game.

It all seems uncharitable — unworthy of that which is the most noble and honorable about our divine nature.