This is part ten in a series about surviving separation from your spouse. Read all posts in this series.

Gregg and I have been married for nine years. We didn’t live together until our first anniversary. Three months after we married, he deployed to Afghanistan. A couple of years later, he changed his military specialty and went to school 400 miles away for eight months. A couple years later, he went to another school, even further away, for six months. On top of these extended absences, his civilian job had him away from home for months at a time, when he would come home on Friday night and leave again on Sunday.  He is currently in Afghanistan again, this time as a civilian contractor, and has been working there for 26 months. We have spent more time apart than together, so we have learned how to have an abiding, intimate relationship even though we’re, at times and currently, thousands of miles away from each other. This series will provide you with little tips and hints we’ve picked up along the way.

I’m not a handy woman.  I can work things that don’t require a lot of mechanical know-how.  For instance, I can use a level and a measuring tape to map out a series of wall hangings that will be evenly spaced and properly hanged; however, that’s just math.  I’m good with math.  What I can’t do is use a drill, a chain saw, or any of the other multiple power tools and mechanical items in my husband’s workshop.

I have blinds that have been sitting on my bedroom floor for about a month waiting to get hanged in my bedroom windows and I can’t do it because for some reason the drill won’t drill the screw through the window frame.  I’ve tried.  Over and over.  It’s just how power tools work for me.  It’s almost a joke at this point.

It would be a much funnier joke if my husband were here to take over when I can’t get it done.

Last week, I was ready to till my garden.  For the first time in weeks it wasn’t raining.  The temperature was pushing seventy degrees at nine o’clock in the morning.  Kaylee was home to watch the boys while I worked a loud machine that would take all of my attention.  It was time.

I’d had a friend’s husband help me bring the tiller into the backyard for me about a week before.  It’s really really heavy and from the storage room to the yard with the garden, there is a series of four different up or down steps and stairs – impossible for one person to maneuver such a heavy and awkward machine.  Knowing it was impossible, I asked him to help me get it into the yard.  He happily agreed and we lifted, hauled, and worked it from point A to point B.

It had been sitting out there, waiting for the right weather to start working.  It was time.

So, I put on some gardening clothes, made sure the children were all content doing whatever they were doing, and went outside to the tiller that was sitting in the middle of the old garden.  I check the gas – full.  I checked the oil – clean.  I remembered from last year how to flip the choke open, turn up the speed of the motor, and pull the little handle. 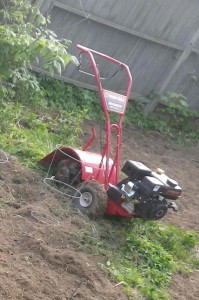 Over and over again I did the same thing.

Finally, about thirty minutes later, I went inside and found the instruction manual for the motor.  I read it from the front cover to Spanish section.  How to store it.  Check.   How to bring it out of storage.  Check.  If it won’t start, check this out on the spark plug.  I went outside and looked at the spark plug – first spark plug I’d ever seen in my life.  Didn’t provide me with a whole lot of information because I don’t know anything about anything like that.  Went back in and kept reading.  “Sometimes, when you first pull it out of storage, you need to put a little bit of gas on the spark plug.”  I don’t even know what that meant, how to accomplish that, or how to not blow myself up in the accomplishment of said task.

After trying to pull the handle to start it over and over for another thirty minutes, I finally went into the house, to my bedroom, shut my bedroom door, and promptly started crying.

I’m not a crier.  This isn’t exactly a norm for me.

Finally, I vented.  I got on Facebook and accidentally posted this to my Hallee the Homemaker page instead of my personal page:

This 8000 mile separation from my husband would be a whole lot easier to handle if I could do simple man-things like starting a stupid engine. My plans to till the garden and get it planted today are thwarted by my inability to figure out why I can’t start the stupid tiller. Quite frustrated. My frustration is only compounded by the fact that I Really.Miss.My.Husband.

Within forty minutes, a friend’s husband was in my backyard.  I didn’t even know he was there until I heard the tiller start up.  I walked back there, and he said, “I poured a little bit of gas on the spark plug and it started right up.”

Now, I know he didn’t sit down and read the instruction manual for the engine from front to Spanish section.  He’s just a man, and he knows simple man-things.

Afterward, I was admonished by him and about ten other male friends who happen to read the Hallee the Homemaker Facebook page that I should have called.  I should have just picked up the phone and said, “Hey, male friend and/or male relative of my husband, can you come start my tiller for me?”

I asked for help to move it – because I knew the impossibility of me moving it alone.  But, I didn’t ask for help starting it, because in my mind, I SHOULD have been capable to start it.

So, instead of just asking for help, I let the frustration build up to an emotional breakdown until someone had to come without being asked to help.

I am so very thankful that there are people in my life who push forward and help without waiting for the invitation.  Because I’m foolish enough to get out there and till my garden with a hoe and a shovel before I’ll just ask.

Now I just need to remember to ask for someone to come  work the stupid power drill to hang my blinds, and I’ll be set for the next seven weeks before Gregg is home.