Gregg and I have been married for over eight years. We didn’t live together until our first anniversary. Three months after we married, he deployed to Afghanistan. A couple of years later, he changed his military specialty and went to school 400 miles away for eight months. A couple years later, he went to another school, even further away, for six months. He is currently in Afghanistan again, this time as a civilian contractor, and has been working there for 24 months. On top of these extended absences, his civilian job had him away from home for months at a time, when he would come home on Friday night and leave again on Sunday. We have spent more time apart than together, so we have learned how to have an abiding, intimate relationship even though we’re, at times and currently, thousands of miles away from each other. This series will provide you with little tips and hints we’ve picked up along the way.

My dad and I were talking last weekend.  He retired from 3o years in the military, and spent much of his career away from home.  We were talking about the strength in marriages that survive separations and deployments, and I mused how this 10-year war has probably taken a toll on the military marriages more than people realize. 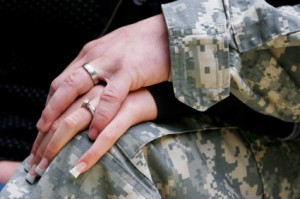 My dad said that in his career he saw a pattern.  The spouse leaves, and the spouse left behind creates a whole new life. Part of it is a defense against loneliness.  Part of it is a way to make time go by faster.  But, new jobs, new hobbies, new schedules open the door to new friends, new intimate circles, and more often than people will admit, new lovers or friends of the opposite sex.  This creates a whole new life of which the absent spouse is not a part, and when he or she returns, isn’t necessarily welcome.

In the meantime, the spouse who is gone is living a life of such stress that until you live it, you have no idea.  You are on a high alert status constantly, with intermittent moments of action.  Or not.  But just the alertness alone takes a toll on the soul.  Friendships develop, brotherhood and camaraderie become coping mechanisms, and faith is either lost or found depending on the individual.  When he or she returns, it’s to an unfamiliar place and to a different spouse, and he may not feel like it’s where he belongs.

I saw a friend whose husband will be home for R&R soon mention that she was afraid of what their relationship would be like when her husband was home, because sometimes when she sees him he’s like a stranger at first, and it intimidates her.

How can we possibly prevent that?

One way is to constantly abide in your husband or wife.  On my birthday, a colleague of my husband’s got on the phone to wish me a happy birthday.  He said, “Your husband talks about you so much that I feel like I know you.”  We changed churches when Gregg was home on R&R one time, and he has never been an active member of that church – but I can guarantee you that every single friend I have there feels like he’s gone there his whole life.  I talk about him all the time.  I think about him all the time.  I tell him, either on the phone or via email or letters, the details of my life – the day-to-day mundaneness.  He is a part of my life whether he is here or not.  I am a part of his life even though I’ve never been there.

It works for us.  The times we see each other, within moments it feels like we’ve never been apart.  Before we’re even home from the airport, I forget what it’s like to not be breathing the same air as him.  The lonliness is gone, the isolation is gone, the despair is removed. 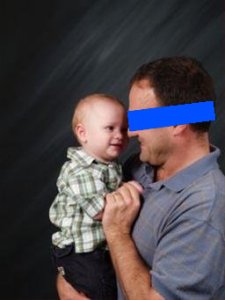 Johnathan is two, almost three.  When he was born, Gregg worked out of town on an extended contract.  The next job he got was further out of town.  Right after that job, he had to be in Ft. Gordon, Georgia, for six months.  As soon as he finished that school, he left for Afghanistan.  Jeb’s entire life, Gregg has been this idea – the man on the computer, on the phone, in the pictures, then man who comes every few months and goes within a few weeks.  But he is Jeb’s DADDY, and Jeb knows that means something.  We were looking at pictures yesterday, and he sat in my lap and said, “That’s me and my Daddy.”  There is no part of Jeb’s life that is untouched by his Dad, and even without his physical presence we have made him such a part of his life that he knows who Daddy is and what that means.

Gregg was on video conference one day and I had to leave the room.  Gregg saw Jeb doing something and reprimanded him.  I heard Jeb say, “Yes, sir,” and immediately stop what he was doing.  It was awesome and affirmed that whatever Gregg and I are doing with this absence and our children, we’re doing it the right way.

Abide in your spouse.  Talk about him, talk to him, make hima part of your life. Stay away from friends of the opposite sex, despite any modern ideas of erased gender lines, so that there is never any temptation to ease loneliness nor any hint of suspicion that could damage and enhance insecurities.  If you have a new job, new friend, a new church – bring your spouse along with you in your heart.  Make him a part of your life in all aspects, so that when he returns, he slips right into his spot and a clearly defined role in your life.

You can survive separation.  It is temporary – a drop in the bucket of the time of your life and your marriage.  You’ll get through it, and one day forever from now, you’ll forget how hard it was and how long the days were or how much longer the nights were.  Abide in your spouse.  Keep him there with you in all that you do.