Surviving Separation: Dealing with It

This is part eight in a series about surviving separation from your spouse. Read all posts in this series.

Gregg and I have been married for over eight years. We didn’t live together until our first anniversary. Three months after we married, he deployed to Afghanistan. A couple of years later, he changed his military specialty and went to school 400 miles away for eight months. A couple years later, he went to another school, even further away, for six months. He is currently in Afghanistan again, this time as a civilian contractor, and has been working there for 21 months. On top of these extended absences, his civilian job had him away from home for months at a time, when he would come home on Friday night and leave again on Sunday. We have spent more time apart than together, so we have learned how to have an abiding, intimate relationship even though we’re, at times and currently, thousands of miles away from each other. This series will provide you with little tips and hints we’ve picked up along the way. 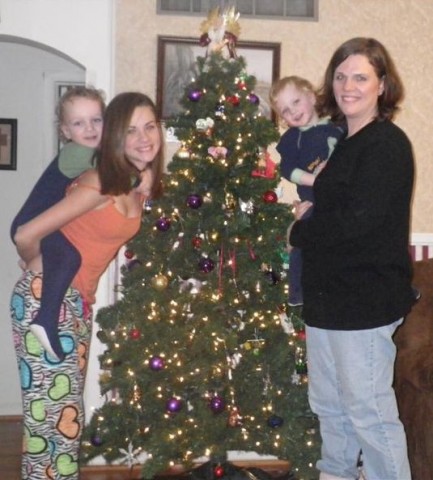 We’re smack dab in the middle of what they call “The Holiday Season.”  Thanksgiving is behind us.  Christmas is looming.  I mailed Gregg’s birthday box Monday — the third year in a row I’ve mailed him a birthday box instead setting the table with the birthday table cloth and kissing him Happy Birthday.  I have a 4-year-old who tries desperately to believe in Santa Claus despite the fact that we don’t even talk about Santa Claus in our house.  When I tell him that Mommy and Daddy are Santa Claus, he has now become convinced that Daddy will come at Christmas like Santa.

A piece of my puzzle is missing.

I want to cry and wail and kick and scream and tell the holidays to go away.  I want to whine to my husband about how “hard” it is.  It’s so “hard” to do this thing – raising these children and living this life – without him.

Then I stop.  Then I remember.  I am in our home.   I’m sitting on our couch with the Christmas tree blinking right next to me.  Our son is sitting against me, watching television.  Our other children are sleeping upstairs.  My home is filled with the smells of home cooked, consciously healthy food.  I’ll hug our children, talk to them face-to-face, interact with them, share meals with them, laugh with them.  At night I’ll go sleep in our bed.  On Sunday I’ll walk into our church, hug our friends, worship with our church family.

I have an amazing life and I have nothing to complain about.

For the third year in a row, my husband will receive a birthday box packed by his wife and children instead of sitting down at his table with the Happy Birthday table cloth covering it and his children singing “Happy Birthday” to him.  He will receive his Christmas stocking stuffed with beef jerky and smoked salmon instead of putting together toys and stockings for his kids.  He’ll go to work and do his job on Christmas because war doesn’t stop just to celebrate the birth of our Savior and King.  He’ll do it because that’s what he has to do in this season in our life.

And he’ll do it without crying and wailing and kicking and screaming and telling the holidays to go away.  He’ll do it without whining to me about how “hard” it is.  About how “hard” it is to do this thing – this living day in and day out in a war zone; this eating crappy food and being thankful for how much better it is than the last place; this not being able to sleep for more than an hour at a time because just a few hundred feet from where he lays his head, fighter jets take off in full after burner; this not being able to touch his children, kiss his children, actively raise his children; this sleeping in a single bed with a thin lumpy mattress, suspended off of the ground to keep the cobras and spiders out of his bed.

I don’t have it hard.  My heart aches, my soul yearns – but I have it easy.  So, I can deal with this season, and I can do it without crying to him about it and making it even harder on him, making him feel even worse for doing what he has to do for his family.