One night this past December, someone driving their car down a narrow road in my hometown slid on the ice and hit a power pole, which knocked the power out in my house about 8:00 in the evening.  I know it was right around 8:00, because Scott and Johnathan were in the bathtub.  Without warning, my house was plunged into total darkness.

I was in the bathroom with the boys and reached into the linen closet where the flashlight is kept.  Keeping the boys calm, I hit the “on” button.  And nothing happened.

Kaylee was in the living room and she made it to the front door and got it opened.  It was dark outside, too, but we have solar lights on the stairs leading up to our front door. 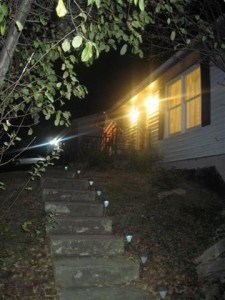 Kaylee grabbed one right near the front door and brought it into the bathroom.  She helped me get the boys out of the bath and into the front room while I used that solar light to look for matches, batteries — anything.  I couldn’t find anything.  The most frustrating thing is that I have candles everywhere – and had no matches.

I stepped outside to get more solar lights and the next door neighbors were outside.  He was nice enough to loan me a flashlight and I gathered solar lights and brought them inside, shielding one as a nightlight for the boys so that they’d go to bed, giving one to Kaylee to put in her bathroom, placing them in several areas around the house.  The power came on about an hour after the kids went to bed.

I was so irritated with myself. My pantry is stocked with enough food that I could frugally feed my family for probably 6 months or more.  I have water purification tablets, Steno cooking fuel, emergency gas cans, water containers.  I could probably perform an amputation with the supplies in my medical kit.  I have extra medicine all boxed up nicely in the event of global crisis.  I have all of that and couldn’t find a flashlight that would work or a match to light one of the dozens of candles in my house.

And what made it all worse was that I do not do well in the dark, so for a few seconds when it first happened, I didn’t know what to do.

The next day, I replaced all of the batteries in the flashlights I have strategically placed around the house.  I also put together an emergency box of just candles and matches, and put it somewhere that is an easy, obstacle-free walk to reach it.

It’s good that I did that, too.  Because, not a week later, the exact same thing happened again.  Right at 8:00, too.  But this time, I was prepared.  Kaylee discarded the laundry she was folding and opened the front door, grabbing a solar light which she took it into the bathroom with the boys.  As soon as she arrived, I went into the kitchen and, blindly, found my emergency kit. 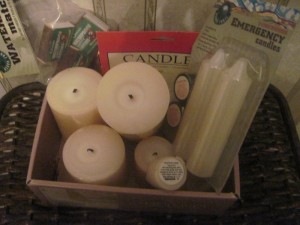 While she, once again, dried boys off and got them into pj’s by light of solar lamp, I lit a candle and put it in the kitchen, put one in the bathroom, and several in the living room. 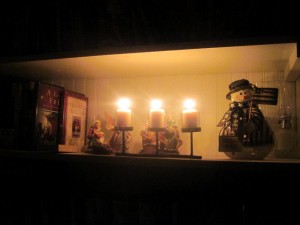 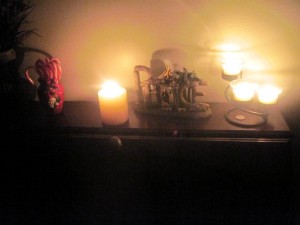 You can tell by the pictures how traumatized the children were by the whole incident. 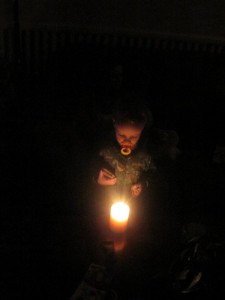 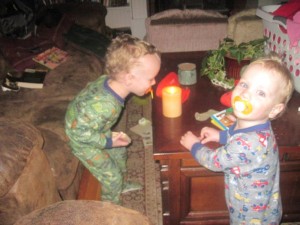 Do you have  an emergency kit?  What do you keep in it?