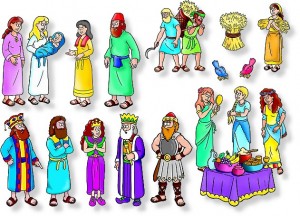 One of the hardest things, for me, about reading my Bible is the inability to be able to picture what’s happening in my head.  Growing up in Sunday school, every story was told with those felt characters on a felt board.  All of the men looked the same, all of the women looked the same, and despite a few thousand years and thousands of covered miles, everyone dressed the same and had the same props.

In my early twenties, I was listening to Dr. David Jeremiah as he taught the book of Daniel, and the way he described the rooms, the sounds, the probable smells took me into that book in amazing ways.  For the first time, the Bible became more than words and little two-dimensional felt people to me.  It became real people, real places, real times.  Instead of just cartoon drawings and renditions, the miracles became miraculous.

I tried to go into every book of the Bible that way, but I wasn’t always able to.  I don’t know enough about the history of some areas and the traditional dress of others.  But I try to imagine it, to comprehend it, to apply to real life.

Do you have the same problem?  Is it hard for you to imagine a real place and a real time with real people when you read the Bible?  Are we so far removed from ancient Israel that we simply don’t have the experience on which to draw any kind of real understanding of the events? 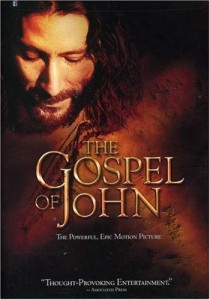 My dad has been recommending a movie to me for some time now.  I finally took the time to sit down and watch it.  It’s called The Gospel of John.

This movie is fantastic because every single word spoken, either by the characters or by the narrator, are scripture.  If the exact words are not in scripture, then they are not spoken.  The narrator recounts the Gospel of John, in the order in which it was written.  The scenes are played out in front of you – real – no felt boards here.

It is a WONDERFUL tool to use to teach yourself how to read the New Testament, how to picture scenes and people in your mind, to hear voices and inflections, to see the landscape and the interior of housing.

I was able to watch it through my Netflix instant account.  If you have not seen it, I highly recommend it.