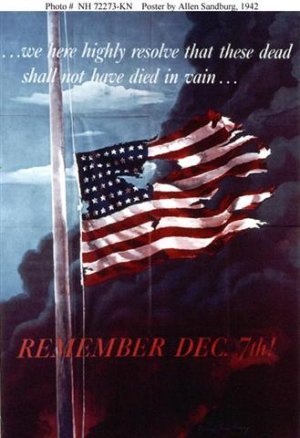 A guest post today by my wonderful husband Gregg

The Day that will Live in Infamy

This poster was designed by Allen Sandburg, issued by the Office of War Information, Washington, D.C., in 1942, in remembrance of the Japanese Attack on Pearl Harbor on 7 December 1941. The poster also features a quotation from Abraham Lincoln’s Gettysburg Address: “… we here highly resolve that these dead shall not have died in vain …”.

My beloved bride and I are army brats.  My bride was nearly born in a helicopter on her way to the hospital somewhere in the airspace over Nurnberg.  I was born in DeWhitt Army Hospital at Fort Belvoir.  Our very first breaths on this earth were drawn to the smell of uniforms.  I have served in one capacity or another since the end of my first year of college. We have been around soldiers, sailors, airmen, and marines — and their loved ones — for the better part of our lives.

Today, my nation remembers our fallen dead who perished in an unprovoked attack prior to a formal declaration of war.  The day that will live in infamy solidified a nation’s wavering resolve.  Our nation, in 1941, had come through the fraternal bloodbath of the War Between the States which cost more American lives than any other conflict before or since, and then sent our best and brightest “over there” to be ground to dust in the pointless gristmill of the Great War.  As a nation, we had all but beaten our swords into plowshares as the world we knew steadily tore itself to shreds in Europe and Asia.

December 7 of that year infamously changed everything.

The 7 December 1941 Japanese raid on Pearl Harbor was one of the great defining moments in history. A single carefully-planned and well-executed stroke removed the United States Navy’s battleship force as a possible threat to the Japanese Empire’s southward expansion. America, unprepared and now considerably weakened, was abruptly brought into the Second World War as a full combatant. — US Navy History and Heritage Command

Our culture has an image of American Soldiers as hawkish simpletons, a collection of fools who kill remorselessly and indiscriminately, with hate in their hearts and blood in their teeth.  Our culture could not be more wrong.

It is a life choice to serve, to sacrifice, to risk everything for the hope of a greater good and a better tomorrow.

The most insulting and hypocritical question ever asked of me was, “Why not pray for peace.”  America’s fighting men pray more fervently and more sincerely for peace than any pontificating Monday morning armchair quarterback I have ever met.  America’s fighting men are the very souls who must actually go do, actually face the very real horrors and rigors  and deprivations of war.

When people want to forget days like today, marginalize those very real sacrifices and the loss their loved ones feel, those people dishonor every sacrifice that has ever been made on their behalf by better men than they.

America is more than a nation, it is a belief.  It is a belief that we, as free created beings, have rights handed down by our Creator, namely God.  It is an idea that these rights cannot ever be stripped, abridged, slighted, aliened, or removed.  They are inalienable rights.

It is a belief that we must, from time to time, roll up our sleeves and fight and sweat and bleed — and possibly even die — in order to preserve those rights when some two-bit so-and-so tries to infringe upon them.

Today, I serve in the Global War on Terrorism for my country because I serve my country more than myself.  Today, I honor those who served before me, those who made a better tomorrow for my children, and to those who loved them and honor their sacrifice.

For more information about the Pearl Harbor attack, visit the US Naval History and Heritage Command website.