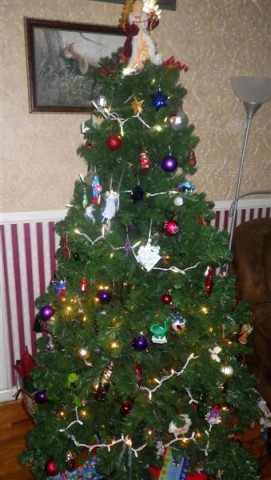 Decorating my Christmas tree is a hodge podge of ornaments that have almost all been gifts to us in some form or fashion.  I have very few “plain” ornaments simply because we have so many of the personalized and special kind that any more would really just crowd it.  But I do have a set of plastic purple ornaments.

As we were decorating the tree yesterday, Johnathan, who is extremely interested in what anyone’s “favorite color” might be, asked me about them.

“Is your favorite color purple?” he asked.

“No,” I said.  We’ve played the favorite color game every day for weeks.  He knows full well that mine is not purple.

“Do you like purple because Grandma [my mom] loves purple?” he asked.

“Are these purple balls for Kaylee?” he asked, knowing his sister’s “second favorite color” is purple.

“No, they’re mine.  And they’re my favorite ornaments,” I said.

He was intrigued that, among the Superman and Spider Man ornaments that were his, I would like the “plain purple balls” on our tree more than anything else.

When I left Kaylee’s dad, I moved on December 15th.  One might wonder why I moved out of my house the week before Christmas when we had a 4-year-old.  Most people would try to “stay normal” until after the Christmas holidays for the sake of their children.  My timing had less to do with me and more to do with the fact that he’d moved his girlfriend into our guest room on the 12th.

He told me about his girlfriend the first weekend in December.  It took a couple of weeks to find my little duplex and get the money together to move.  During that time, my friend Sharon came to me and said that she would watch Kaylee at no charge until she started kindergarten in the fall.  At the time, she was in a private preschool, and this would free up some much needed several hundred dollars a month for me.

I wasn’t emotionally distraught at the end of my marriage.  The strongest emotion I felt was apprehension about being alone for the first time in my adult life.  I had been with him since I was a senior in high school and no idea how to be alone, much less where to even start.

It was the week before Christmas, and many friends were concerned about me.  I had no family where I lived in Florida – we were surrounded by my (ex)husband’s family.  I had declined holiday invites from friends and had determined that I would just spend the time off of work getting my new house put together.

One day right after I moved, Sharon asked for my house key under the guise of picking up some girl toys for Kaylee (she had three sons and no girls).  I didn’t think anything of it. 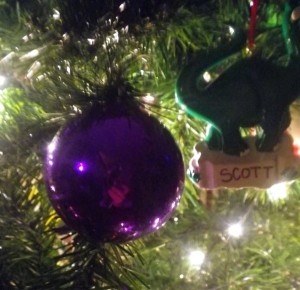 I finished my day, picked Kaylee up, and went home.  There, on a little table in the corner of my little duplex with the futon for a couch and the flea market coffee table was a little 4-foot Christmas tree, covered in plastic purple balls, silver icicles, and white lights.  My friend had decided that regardless of my alone-ness, I needed a Christmas tree, and she and Kaylee had spent the morning buying ornaments (color compliments of my girlie daughter and my girl-less friend) and decorating my tree.

That act of love removed my apprehension of anything in my future.  Kaylee and I would get through this, and we would be way better for it.  My friend network was my rock and support system, and this little tree with its plain plastic balls symbolized that support.

It has been ten years since then.  For ten Christmases I’ve pulled those plain purple balls out of their box and hanged them on my tree.  Every time I do, I think about that first Christmas, and what good friends I had.  I think about my friend Sharon and the love she showed me.  She was just trying to brighten my Christmas.  I don’t think she even realizes how she strengthened me through her simple act of friendship.  She may not even remember it, but I’ll never forget it.