Hallee on the Issues: The War on Terror

In 2002, you would have been hard pressed to find a more patriotic American than me.  I was a newlywed, the wife of a Special Forces soldier who was fighting the War on Terror on the front lines, and I was a huge advocate for our presence in Iraq.  The partisan political buzz didn’t dissuade my opinions (and in hindsight, I don’t believe I was wrong) about aggressively battling terrorists on their home turfs.

But, aggressive isn’t really the word I’d use to describe what we did.  The world watched, literally, in real-time as our military did their jobs the best they could do with one hand tied behind their backs.  Embedded reporters fed armchair quarterbacks their hourly dose of information, ready for the criticism to spew forth from 24-hour news reports, talk radio stations, and the blogosphere.  The administration did their best to keep the criticism to a low roar, and kept the hands of the military tied.

In 2004, I worked and fought and scraped to help get President Bush re-elected.  Living in Tallahassee, Florida, I knew first hand that every single vote counted (unless you were military with absentee ballots, then, strangely, your votes didn’t get counted — but that’s another story for another time). I thought, honestly, that he was holding back because he needed to get re-elected.  Once re-elected, he didn’t have to campaign anymore and could loose those hands that he’d tied.  He won the election, his new term started and then…

…nothing.  Nothing changed.  We kept tip-toeing around, appeasing evil, afraid to do something wrong and therefore doing nothing right.

Here we are – TEN YEARS TWO MONTHS  after the terrorist attacks on 9-11 and we’re still there.  Our military men and women could not be finer – and if they could do their jobs the best way they could, without worrying about press or armchair quarterbacks or bloggers or 24-hour news channels, then we could have gone in there and been done with it.  We could have made terrorists quit plotting against us for fear of retaliation. 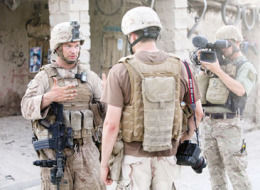 But the simple truth is that it is impossible to win a war when you aren’t even allowed to hurt anyone’s feelings.

The fact is our leadership – at the very top and from the very first all the way until now – screwed up.  And it is the soldiers who paid for their cowardice and greed in the face of judgement and criticism.

Carl von Clausewitz, a soldier in the Prussian Army in the late 18th and early 19th centuries, and author of the book On War, correctly informed us that war is not an independant event, but rather that it is politics by another means.  So the question is, are we executing politics by means of abhorrent warfare?  Or rather are we merely practicing loathsome politics while at war?