I haven’t always been afraid of spiders.  My mother is and always has been, but they never really scared me.  At least, until my senior year of high school, when my friend, Robbie, took me to see the movie Arachnophobia.  That movie scared me.

Not long after, I was living in St. Augustine, Florida, and a wolf spider was in my bathroom shower.  I don’t know if you’ve ever been to Florida and seen the wolf spiders.  But, as harmless as they are, they’re BIG.  And scary looking.  I coated that thing with bug spray and it curled up in a ball the size of my fist and fell into the bathtub.  After work that day, I went in to the bathroom to clean it up and it was alive.  Holy cow, that scared me more than the movie did. 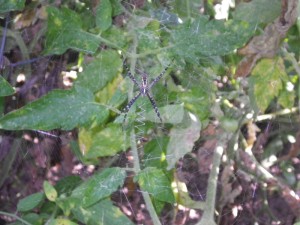 The arachnophobia was starting to cement itself in my heart.  I tried to ignore it, but it was a losing battle.

When Gregg went to Afghanistan in 2002, we were talking on the phone one night and he mentioned something about the cobra that lived under his tent.  After growing up with the movie Rikki Tikki Tavi the thought of a cobra being under his tent was kind of freaky.  I said, “Why don’t you kill it?”  He said, “Because it eats the spiders.”  A cobra was better than a spider?  :::shudder::::

My arachnophobia was kind of solidified at that point.

I fight it.  I lived alone for about three years.  If a spider needed handling, I was the only one to handle it.  I couldn’t give into it.  So, my heart will start pounding and I’ll panic, then I’ll get a grip on the panic and move forward and force myself into action.

Since Gregg has been home, though, it’s like the phobia has taken a firmer root.  The other day, I carried my compost bowl out to the composter, dumped it, and carried it back inside.  As I set it down, a huge scary brown spider crawled out from behind it.  I hadn’t set it down outside, which meant that the spider was on that bowl the whole time I was carrying it.

In a panic, I tossed the bowl into the sink.  It landed upside down in a little bit of water.  The spider scrambled up the bowl and perched on the bottom of the bowl.  For forty-five minutes I skirted that thing.  My heart pounded.  Cold sweat broke out all over my body.  I felt that spider watching me.  Finally, in tears, I called Gregg into the kitchen and asked him to do something with it. 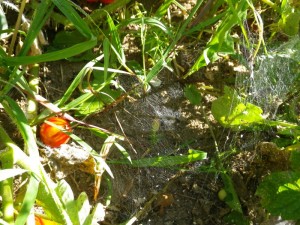 “It’s just a harmless garden spider, honey,” he said, “You should have called me in here.”

I tried to explain that I’d spent that time trying to get up the courage to kill it.  He said, “I’m home.  I’ll handle spiders for you.”

And then there’s my garden.  Not long ago,  I was happily following a vine of cucumbers through my tomato plants, just enjoying picking ripe cucumbers off of the vine, when I accidentally touched what I know of as a banana spider.  A banana spider, in Kentucky?  I knew of them in Florida, but I didn’t know there were any in Kentucky.  I totally panicked and didn’t go back into my garden for several days.

By the time I went back, spiders had totally taken over my tomato plants.  All different breeds and sizes.

Now, I have an organic garden.  Spiders are a good thing.  They eat the bugs that I don’t kill with chemicals.

Telling myself how good they are doesn’t really help me a whole lot.   It is a force of will for me to pick tomatoes at all.

I do it.  I can’t let the produce on forty tomato plants just rot because of a stupid phobia.

But, I’ll tell you what, it’s exhausting for me to go pick my garden.  And, I don’t think I’ve followed that cucumber vine since that day.  Which is fine – I wanted a cucumber for seed, anyway.  Which is my story that I’m sticking to.