Seeing My Daughter Through New Eyes 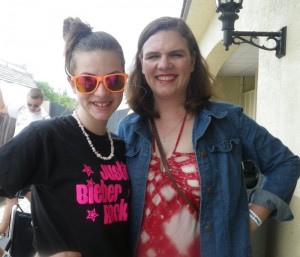 Between daycare, preschool, kindergarten, elementary school, and middle school, Kaylee has been on many, many field trips for the  last fourteen years.  Up until the day I went into the hospital on bed rest with Scott’s pregnancy, I worked and never could help chaperon.  Despite the “freedom” to my schedule homemaking provides (I’m trying not to laugh as I type that), breastfeeding Scott until well into my pregnancy with Johnathan, then nursing Johnathan and dealing with a non-sleeping Scott took away my opportunity to chaperon as well.

So, here we are, fourteen years into Kaylee’s life, and I went on my first field trip as a chaperon.

We went to an amusement park in Ohio called King’s Island.  It reminded me very much of a place we used to go to in Georgia called Wild Adventures.  It had one roller coaster after another thrill ride, a separate water park, and even a shopping strip.  (Although, I’ve only seen inflated food prices like that in the Paris airport — $9 for a Chic-Fil-A sandwich and $4 for a bottle of water.  If you ever get a chance to go, bring your own food and drinks.) 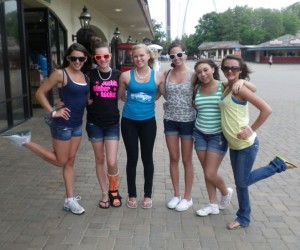 Kaylee has a lot of friends.  She’s an alpha personality, a natural leader, and breaks the traditional clique lines without fear.  She often has friends over, on a one-to-one basis, but this was a rare opportunity for me to see her with a group setting outside of our church youth group.

I can sit here all day long and tell you my daughter is an amazing individual.  She is a wonderful person with a good heart, is well behaved, even tempered, and polite.  But I’m sure that a lot of parents say that about their children and find themselves having been fooled, or fooling themselves into thinking that about their kids.  I realize that parents can be blinded about their own children.  But, I have to say, that after the field trip and based solely upon the quality of the friends in which she spends most of her time, my opinion of my daughter has only grown. 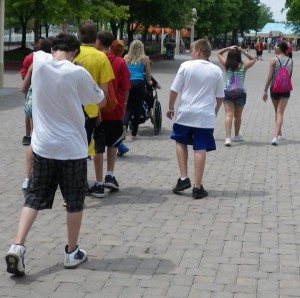 We were in a group of six.  Every girl in our group was someone Kaylee has over, goes to their houses, or talks about all the time.  I’ve never seen them in a pack before.   All day long, I just kind of stayed in the background and let them be.  I didn’t ride rides – I just stayed with Kaylee’s wheelchair (she’s still in a cast from breaking her ankle a few weeks ago) and everyone’s backpacks while they rode rides, and as the day wore on, they were less aware of me.

They laughed.  They carried on.  They playfully argued over who got to push Kaylee’s wheelchair rather than resented being restricted by it.  They never bickered nor had a catty fight (we’re talking six 14-year-olds, and that is quite an accomplishment).  They agreed on rides, where to go, when to eat, what to eat – it was so nice.  She has got a quality group of friends. 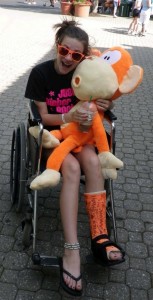 Eventually our little group of six was taken over by a group of six boys.  More friends from school.  More names I recognized but had never met.  Even with the boys there, surprisingly, nothing changed. They were incredibly well behaved – even more so considering their chaperon was sitting at Starbucks having them check in every hour.  They were nice, fun, playful, and genuinely pleasant to be around.  One of them even gave Kaylee a huge, ugly, orange monkey stuff animal (I’ve never mentioned my dislike of stuffed animals, have I?).

I am so proud of my daughter and the decisions she’s made in her life up to this point.  I’m proud of who she is, and how she carries herself and behaves.  I love that parents tells me they’ve never had anyone so polite over and that she’s welcome in homes any time.  I love that about her.  And I really enjoyed seeing my view of my daughter through my blinded parental eyes absolutely affirmed by her group of school friends.