Every Sunday, my clever husband offers me a “day of rest” by writing posts on the subject of his primary ministry. This is a topic that is gaining more and more attention in our modern culture. The topic, Creationism vs. Darwinism, is a subject that has broad reaching scientific, social, and metaphysical implications.  For believers and non-believers alike, the primary purpose is to present scientific, historical, logical, and/or sociological data in an empirical fashion, as much as possible written in layman’s terms, and in a format suitable for supplementing any homeschool curriculum whether you choose to believe the Biblical account — or secular guesses — about the origins of human life on earth.

This is the first of three final posts which will conclude this series on Darwinian Evolutionary Frauds.  In the final three weeks, I will focus on these three claims:

For this case study, I will use the case of “Lucy” and if you need background on Lucy, please read the introductory post from last Sunday.

FACT 1: There is NOTHING in observed science that disputes the Biblical account of creation.

FACT 2: There is NOTHING in observed science that supports Darwinism or Darwinian theories.

Supporting Detail:  In order to understand the Darwinist world view, one must first understand some basic laws of the scientific process.

There are many, many scientifically sound evidences that the Biblical account of creation is completely accurate and fully supported by science. To name a few that come immediately to mind:

Insufficient helium in the Earth’s atmosphere
Incorrect nuclear decay rates (Radioisotope dating)
Not enough sodium in the oceans
Rapid disintegration of comets
Erosion of continents
Sediment in the ocean
Decay of the Earth’s magnetic field
Carbon-14 ratio in the atmosphere
Radiohalos for polonium in granites
Population statistics
Recession of the moon
…and many, many more.

What is the basis for so-called scientific (I Timothy 6:20 KJV) Darwinian theories? In my opinion, either, as has been aptly demonstrated over and over in this series alone, an intentional fraud — an intentional lie or attempt to decieve — or what amounts to an assumption.

I hearken back to Ptolemy. In Ptolemy’s time, “everyone knew” the universe circled the earth. Ptolemy theorized “epicycles” in the orbital paths of the sun and all of the planets that orbit the earth.  He had to insert epicycles so that the orbital mechanics worked out because “everyone knows” that the earth is at the center of the solar system.  This massive assumption ultimately turned out to be unsound and philosophically biased founded on a preconceived world view. It is, perhaps, the classic case of interpreting facts according to a preconceived philosophical bias. Today, Ptolemy’s epicycles are a footnote and cautionary tale in human foolishness.  I look forward to the day when my grand children can giggle behind their hands about Darwinism in a similar fashion.

One item presented as evidence that was used to argue that Lucy was an upright walker are the Laotoli footprints. In strata assumed to be “comparable in age” to those from which Lucy came are a set of very well defined fossil footprints.

Anatomists unanimously agree that the footprints are indistinguishable from those made by modern human beings who go traditionally unshod. Rather than admit this as evidence that man and Lucy lived side-by-side in the past, it is claimed that an ape like Lucy must have made the footprints because “everyone knows” that man hadn’t “evolved” yet.  Does that sound like good science or does that sound more like a massive assumption based on a preconceived world view or philosophical bias?

Observing the Laotoli footprints, it is almost inconceivable that an austrolopithocine foot could have made them.  The evidence is clear that they were made by human feet.  One can then reasonably conclude that either human beings lived side by side with apes like Lucy according to the Darwinist timeline, about 4 million years ago, or else the timeline is wrong.  Good scientists would erase all assumptions and start fresh based on a new hypothesis.

Good science does not present the Laotoli footprints as evidence for human evolution.  It is only circular reasoning that can attempt to admit them as evidence, yet this is exactly what continues to be done in museums and public schools today.

The geometry of Lucy’s hip clearly showed that she didn’t walk upright.  Just as with any modern chimp, she may have walked upright for a few steps and then only awkwardly.  In summary, the geometry was a problem.

But, all hope was not lost, to paraphrase the documented fraud that soon occurred.  Ladies and gentlemen, beloved readers, Darwinists simply took a power tool to her hipbone to reshape it into a geometric architecture that might work.  Instead of the actual evidence, the real bone, the altered bone was then used as “proof” that Lucy walked upright after it had been ground down and cut to pieces that more closely fit the Darwinist preconceived bias and world view.

Here are some scientific facts. 1) Human feet are different from any in the animal world—no other organism has feet like ours. The arch and the toes are distinctive from every other living organism. 2) The talus (ankle bone) of any organism must tilt forward for upright walking to be possible.  3) Human beings have a very distinctive gait and stride and forensic study of the human gait can reveal whether a person was strolling or running.

There are many similarities between apes and man, but one of the most distinctive differences is the feet. Ape feet are more like our hands, with an opposable big toe similar to our thumb but without the full range of motion a human thumb offers. The geometry of the bones of Lucy’s feet clearly show that she had feet much more like that of a modern chimp. This fact was obviously ignored when creating artist impressions for textbooks and museum dioramas.

Also, back in 1982, Jeremy Cherfas stated that Lucy’s ankle bone (talus) tilts backward like that of a gorilla, instead of forward as in human beings. A forward tilt is a requirement for an organism to walk upright. This is why animals like dogs, chimps, and horses can walk on their hind legs for only short periods of time and it is not their preferred method of peregrination. Cherfas concluded that the differences between Lucy and human beings are “unmistakable” (J. Cherfas, New Scientist, (97:172 [1982]).

But this isn’t the first time human beings have made creatures who don’t actually walk upright, or engage in unlikely social activities, or manipulate tools appear to do so.  In fact, doing exactly that can even be mildly profitable in certain circles. 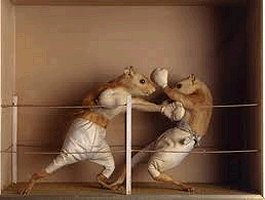 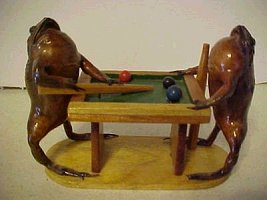 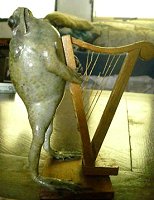 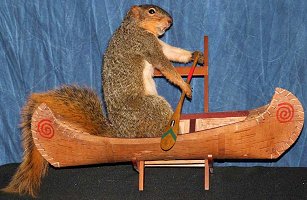 Note the thoughtful gaze, upright stance, squared shoulders, human like hands, and use of tools.

Studying these very obviously sound artistic impressions of these scientifically and paleontologically recovered animal remains, we must conclude that hamsters, frogs, and squirrels walk upright, engage in sports, have a talent for music, and can articulate simple tools.   If our premise is that these noble creatures MUST have done so based on our secular humanist agenda of methodological naturalism, then we will not even revise the premise of the hypothesis.  We will simply discount any contrary evidence.

We can ignore any evidence that demonstrates that their bone structures clearly do not allow them to do so and the fact that none of this has never been observed to occur.  Well, reasonable people can’t ignore those facts, but Darwinists can.

In the case of the Laotoli footprints, there are a tiny set of footprints inside the larger prints, as if a small child was jumping into the footprints of his parent as they crossed the muddy plain.  The gait is measurable and revealing and lends further evidence that the creatures who made the footprints were 100% human.  Darwinists at the time stated that, instead, it was possible that a yet to be discovered species of dinosaur had feet very much like a human being.  How’s that for an explanation?

In science, if you find that evidence indicates that your hypothesis is wrong, a pure scientist would start fresh with a new hypothesis that takes into account the new evidence.  One does not come up with explanations and rationalizations that are so far out and unlikely that they border on childish merely to cling to an antiquated theory.

In science, all evidence is considered.  In science, one does not take a power tool and extract the offending evidence that refutes the theory.

In science, one does not perform taxidermy on a frog to make the frog play drums and guitars.  One takes into account that the evidence displays that Lucy was a knuckle walker, and one depicts her as such.

The fact that the very discipline of science is SO OFTEN ignored in the practice of Darwinism begs the question — why?  To what end?  What is the purpose of perpetrating what amounts to a massive and ongoing hoax?  Would not the world and everyone in it be better served by the TRUTH?

The truth is that God created everything including time and the universe and every way we have to measure every material thing.  The truth is that Lucy was an animal who lived some time in the past in this fallen world.  Raising a dead monkey to the status of an icon is simple idolatry, and foolishness beyond my ability to summarize in words.

This kind of twisted thinking is hardly new.  In fact in closing today’s post, I will recall the words of the prophet Isaiah as found in chapter 44 verses 12 to 20 who said (paraphrased):

(44:14-15) He [the woodworker] has cedars cut down for himself, he takes an oak and lets it get strong among the trees of the wood; he has an ash-tree planted, and the rain gives it growth. Then it will be used to make a fire, so that a man may get warm; he has the oven heated with it and makes bread: he makes a god with it, to which he gives worship: he makes a pictured image out of it, and goes down on his face before it. (19-20) And no one takes note, no one has enough knowledge or wisdom to say, I have put part of it in the fire, and made bread on it; I have had a meal of the flesh cooked with it: and am I now to make the rest of it into a false god? Am I to go down on my face before a bit of wood? As for him whose food is the dust of a dead fire, he has been turned from the way by a twisted mind, so that he is unable to keep himself safe by saying, What I have here in my hand is A LIE.

Just as in the time of Isaiah, it is equally true today.  Clear observations, clear thinking, and a pure mind will result in arriving at clear and correct conclusions instead of worshiping dead things hoping desperately for hopelessness, praying daily for the meaning of it all to ultimately be meaningless.