Tip: The Importance of Measuring 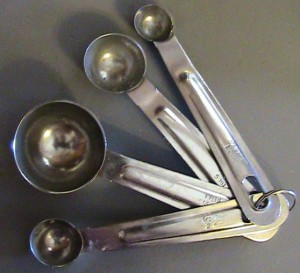 I make the same bread recipe every week of my life, and have for the last two years: Whole Wheat Honey Oatmeal Bread.  Most weeks, I also make French Bread.  Granted, there are weeks that I don’t make bread, but those are more than balanced out by the times I’ve made the bread for bake sales or women’s ministry bazaars.  So, I’m sure that I’ve made each one of these recipes at least 100 times.  Likely more.  I’ve probably made pancakes 500 times.

Monday morning, as I made pancakes, I pulled out my worn recipe book and it fell open, on its own, to the pancakes – a testimony to how many times I’ve read that recipe.  As I was baking for the week and making both kinds of bread, I pulled out my worn recipes and followed them, carefully, step-by-step.  As I did this, I was reminded of something that an ex-inlaw once said to me.  She said that I wasn’t a real cook because I measured.  She said that real cooks don’t have to measure.

Now, that wasn’t the first thing she ever said to me to put me down, nor was it the first thing she was wrong about.  I will say that the first time I watched Everybody Loves Raymond, a few years into my marriage with Gregg when I could barely remember, on my own, what my life was like back then, I flipped out.  It was like someone had set up hidden microphones in my house for those 9+ long years I was married into that family.  I remember saying, over and over again as we worked our way through the episodes  of the show, “She’s said that to me once!”  “She did that one time!”  We’ll save the Thanksgiving that I hosted at my house where this particular inlaw, her mother, and an aunt despite my telling them that I didn’t need them to bring any food brought the entire dinner and then the entire family ate from their food and left mine sitting there untouched for another time.  If you’ve ever seen the show, you might have an idea of what I speak.

As far as cooking vs. baking goes, I don’t measure when I make soup or most casseroles.  I do dash here and splash there, then taste taste taste.  Sometimes, to make recipes for you, I have to slow down my creative cooking process and pay attention to how much I’m dashing and splashing.

But when it comes to baking, it’s important to measure.  That’s because baking is not about flavor.  It’s about chemistry.   It’s about the chemical reaction with this ingredient to that ingredient in this quantity, coupled with these added ingredients.  It’s science first, and art second. 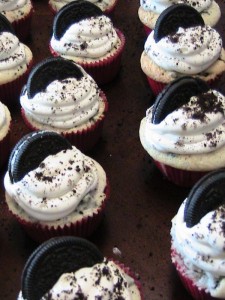 I know that by not measuring you can get it right sometimes, but you aren’t going to get it right every time.  By constantly and consistently measuring, I have never had a bread, cake, cookie, dessert fail that was my fault.  I’ve had bad ingredients, old leavening, low protein eggs, flour with too much moisture, flour with not enough moisture, etc.  But it’s never been because I’ve left out the salt or put too much baking powder in.

And in those best forgotten 10+ years of my life, that particular inlaw had many many fails.  Granted, she had some out of the ballpark successes, but she also had many fails.

Measure.  Carefully read the ingredients and the quantities, even if you think you know them by heart.  And measure.  Then any fail is totally out of your hands, and you will have almost certain success.