In the context of debates, a Pious Fraud is very often a lie, a fabrication, or a forgery. More generally, it would be when an emotionally committed speaker makes an assertion that is shaded, distorted, or fabricated from whole cloth.  The purpose of the Pious Fraud is to use a false claim to bring listeners to believe as the speaker believes.

In other words, Pious Fraud is a fraudulent act done to result in some “good” end, based on the assumption that this intended end justifies the means. Saint Augustine strongly opposed a fallacious form of argument called Pious Fraud. Around the year 400, he wrote two books, De Mendacio (On Lying) and Contra Medacium (Against Lying), on the subject of fraud, deceit, and lies. He argued that the sin of bearing false witness isn’t found in what one does or does not say, but rather in one’s intent to leave a false impression.

In the context of the Creation vs. Darwinism debates, Darwinists have relied heavily upon Pious Fraud since Charles Darwin first published his racist diatribe entitled “ON ORIGIN OF SPECIES OR THE PRESERVATION OF FAVOURED RACES BY MEANS OF NATURAL SELECTION.”

The sheer number of frauds committed in the name of Darwinism ought to rock objective investigators back on their heels and leave them stunned. Why, I ask, if Darwinian evolution is so very scientific and factual, must it be supported time and again and almost entirely by lies, misdirection, and outright — as in blatant and intentional — fraud?

Whenever these fraudulent actions are revealed, as they inevitably are, Darwinists mockingly assert that “scientists” discovered the fraud.   In my mind, this does not excuse the fact that Darwinian scientists perpetrated the fraud in the first place. Then the frauds are quietly swept under a rug until they can be repackaged, dusted off, and perpetrated again.

This is the inaugural post of a new Creation series.  The next series of posts will review some of the more blatant frauds committed by Darwinists in the name of their religion, that being secular humanism.

Most people have heard of the idea that the human embryo, during it’s early development in the womb, goes through various evolutionary stages, such as having gill slits like a fish, a “vestigial” tail like a monkey, and so on.

This concept — once rather pretentiously and inaccurately called the ‘biogenetic law’ –was popularized in the late 1860’s by German fan of Charles Darwin named Ernst Heinrich Philipp August Haeckel. It is also known as ’embryonic recapitulation’ or the theory that ‘ontogeny recapitulates phylogeny’, meaning that during an organism’s early development it supposedly retraces it’s entire Darwinian evolutionary history.

So, a human embryo is supposed to pass through a fish stage, an amphibian stage, a reptile stage, and so on. Within months of the popular publication of Haeckel’s work in 1868, the drawings were shown to be fraudulent. Haeckel fraudulently modified the drawings of embryos to make them look much, much more alike than they actually do.

Haeckel even printed the same woodcut several times, to make the embryos look absolutely identical, and then claimed they were embryos of different entirely different species (dog, chicken, and turtle).

The above pictures were used by creating single woodcuttings and using them as a “rubber stamp” to create the pictures of the supposedly diverse species.  Unlike unique forms found in nature, they were all quite literally drawn from the same mold. 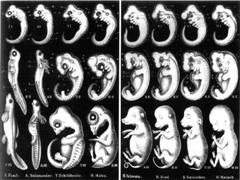 The above picture is one of the most famous of Heackel’s fraudulent drawings depicting many diverse species allegedly right next to each other ending with a depiction of a human embryo.  This fraudulent drawing also relies heavily upon the concept of homology.

Despite exposure as a fraud over a century and a half ago, Haeckel’s woodcuts appeared in textbooks for many years and watered down varients of his drawings often still appear in modern textbooks. 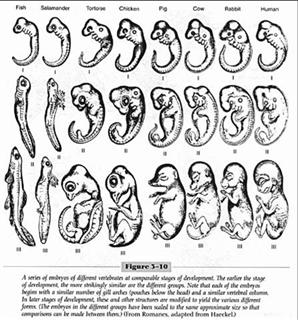 This is one example of a representation from a modern high school textbook.

As to Heackel’s thesis itself, it has been refuted time and time again.   Human beings, for example, never have a gill slit like a fish at any time in our development. What we see there is more like what happens when you try to touch your chin to the middle of your neck. You get a wrinkle in your neck. It has nothing to do with respiration.  You don’t breath through the wrinkle and neither to embryos.  A fish gill is a remarkably complex organ.  Likewise, we are never cold-blooded like a reptile. And there is no such thing as a vestigial organ or bone of any type (that’s another post for another day).

So the theory is utterly wrong. Yet, it still appears in textbooks and I have no doubt that someone reading this went, “Really? We never had gill slits like a fish? But they taught me that in school.”

So there are really two levels of untruths being perpetrated. There is Haeckel’s own personal fraud and there is the continuing fraud that is being perpetrated in public schools today, over two hundred years later.

As to his personal fraud, von Haeckel never made a secret of his agenda. He wanted to kill God. He invented this theory to support Darwin’s work and perpetrated these frauds in order to use them as “evidence” he lacked to mock and belittle the Creationists of his day. He did it for fame and fortune. He did it to walk proudly down the halls of the secular humanist movement of his era alongside his numerous secular humanist peers.

You might imagine that we shouldn’t reward fraud and lies, but in this case we certainly have. Haeckel’s thesis is still taught in many schools as fact to this very day even though any and all “evidence” is entirely falsified. For his brilliantly conceived and executed fraud, Haeckel was awarded the Linnean Society of London’s “prestigious” Darwin-Wallace Medal in 1908. Here in the US, and also in also in New Zealand, there are soaring mountains named after Ernst Haeckel.

So, for Haeckel at least, his fraud paid off in long term dividends…an enduring legacy of lies and misdirection based on false evidence. Now to the continuing fraud that is being perpetrated in public schools…what do you think that means?

In recent years, a state law had been proposed that only factual information could go into any textbook. A school board president asked at the committee hearing, “If you remove this material, what do you propose to replace it with?” What do you suppose she meant by that?

Should we wait until someone can gin up a more impressive fraud?  Or do we need to just keep this falsified evidence firmly in place until we find even a shred of actual and supporting evidence?  In my opinion, we could leave out the lies and frauds and rely upon what we used to call facts and objectivity.  But I am not a school board member so what do I know?

You might ask, “What harm does this fraud really result in?”  Well, it undermines truth.  Is truth still preferable to lies in your worldview?  And the fact is that some of Haeckel’s theses became a part of the pseudoscientific basis for Nazism and that particular social movement resulted in the near extermination of the Jews in Europe. That is a very uncomfortable fact for Darwinists, but a fact nonetheless.

Why do you think it is so important that our children be taught this secular humanist lie to be true? What do you think the meaning is there? In the absence of facts, there remains only an agenda. What do you suppose is the intent of that agenda?

Personally, we should not tolerate being lied to and, as parents, must not tolerate anyone lying to our children. The truth is that there is no fraud contained in God’s word. God does not need to lie to convince anyone of what He is.