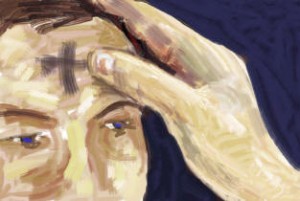 Today is Ash Wednesday and the first day of Lent, both of which mark the beginning of the observance of the Easter Season.

Ash Wednesday comes from the practice of placing ashes on the foreheads of the faithful as a sign of repentance. Traditionally, the ashes used are gathered after the Palm Crosses from the previous year’s Palm Sunday are burned and mixed with oil. In the Roman Catholic Church, Ash Wednesday is observed by fasting, abstinence from meat, and repentance.  It is a day for contemplating one’s transgressions. Ash Wednesday is also the first day of Lent.

In Christian tradition, the purpose of Lent is the preparation of the believer — through prayer, penitence, almsgiving and self-denial — for the annual commemoration during Holy Week of the persecution, death and resurrection of Jesus Christ, which recalls the events linked to the Passion of Christ and culminates in the celebration of Easter, the celebration of the Resurrection of Jesus Christ. 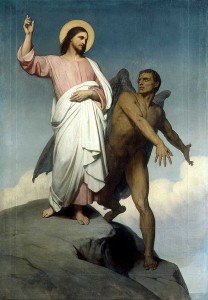 Once baptized by his cousin, John, Jesus retreated into the wilderness, where he fasted for forty days in preparation for the beginning of his earthly ministry.  While he was there, Satan approached him and tempted him, citing scripture.  Jesus in turn overcame all three of Satan’s temptations by citing scripture himself (Matthew 4:1-2, Mark 1:12-13, Luke 4:1-2).  When Satan fled, angels ministered to Jesus, after which he began his ministry on earth. The forty days of Lent represent the time that Jesus spent in the wilderness, where he endured temptation by Satan, before the beginning of his earthly ministry.

Jesus further said that his disciples should fast “when the bridegroom shall be taken from them” (Matthew 9:15), a reference to his coming Passion. Since, presumably, the Apostles fasted as they mourned the death of Jesus, Christians have traditionally fasted during the annual commemoration of his burial. The practice of Lent was virtually universal throughout the Christian world until the Protestant Reformation. While most Protestant churches do not observe Lent, many still do such as Lutherans, Methodists, and Anglicans.

Twitter has been abuzz with talk about what people are “giving up” for Lent.  Typically, you choose something that is important to you and “fast” from it.  I know people who will be giving up coffee, chocolate (ack!), even Twitter, for the forty days.  In the meantime, they also refrain from eating meat.

Lent begins on Ash Wednesday and concludes at the Ninth Hour of Holy Thursday (44 days in the Catholic Church) or on Holy Saturday (46 days for some Orthodox denominations and other sects). The six Sundays during Lent are not counted among the forty days because each Sunday represents a “mini-Easter”, a celebration of Jesus’ victory over both sin and death.

It is traditionally believed that Jesus lay for forty hours in the tomb which led to the forty hours of total fast that preceded the Easter celebration in the early Church.  During that time, people will only drink water while they fast and pray and reflect on the sacrifice of Christ.

Doctrinally, our church does not observe Lent.  However, as individuals and believers, we admire and respect all sincere forms of worship.  If there is a way that we can bless our fellow believers or assist them in their observances, it is our prayer that we can do so in this Lenten season.

I am going to share various traditional recipes during the Lenten season that are “Lent Friendly” and many of them are also Daniel Fast or Orthodox Fast friendly, but more on that later.  It is my sincere hope that these recipes bless you in your observances.